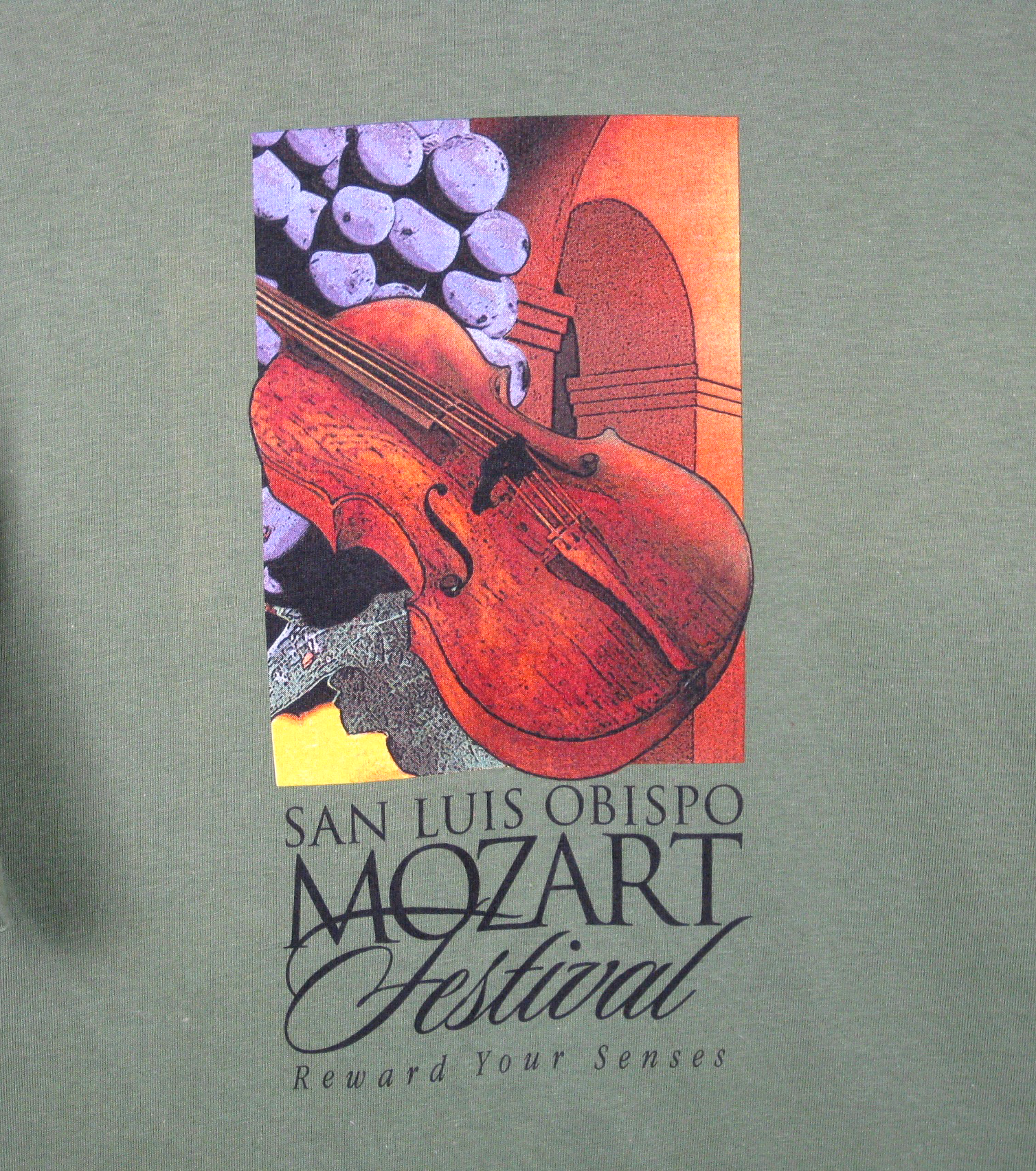 IT WAS THE BEST OF TIMES AND the worst of times. Like A Tale of Two Cities, decorated apparel today is at a pivot point. It’s been more than 100 years since the first T-shirt was screen printed. We have evolved from single-color imprints to complex, full-color, multi-textural images. The technology has evolved, and continues to evolve, but to what end?

If we step back and look at the market landscape, what do we see? Printed T-shirts have been reduced to a virtual commodity. Every consumer “knows a guy that prints shirts.” As a printer, we are interchangeable with any other printer. My own case in point. I’m now in my fifth decade producing award-winning apparel for some of America’s most well-known brands including Apple, Google, Disney, and many others. Yet, where I live, I’m “that guy who prints T-shirts.” But that’s not what I do and it never has been.

The worst of times for us is exactly that, standing out. The whole idea of printed T-shirts was to create “a walking billboard.” An interesting comparison to an old school form of media, also historically produced by screen printing. 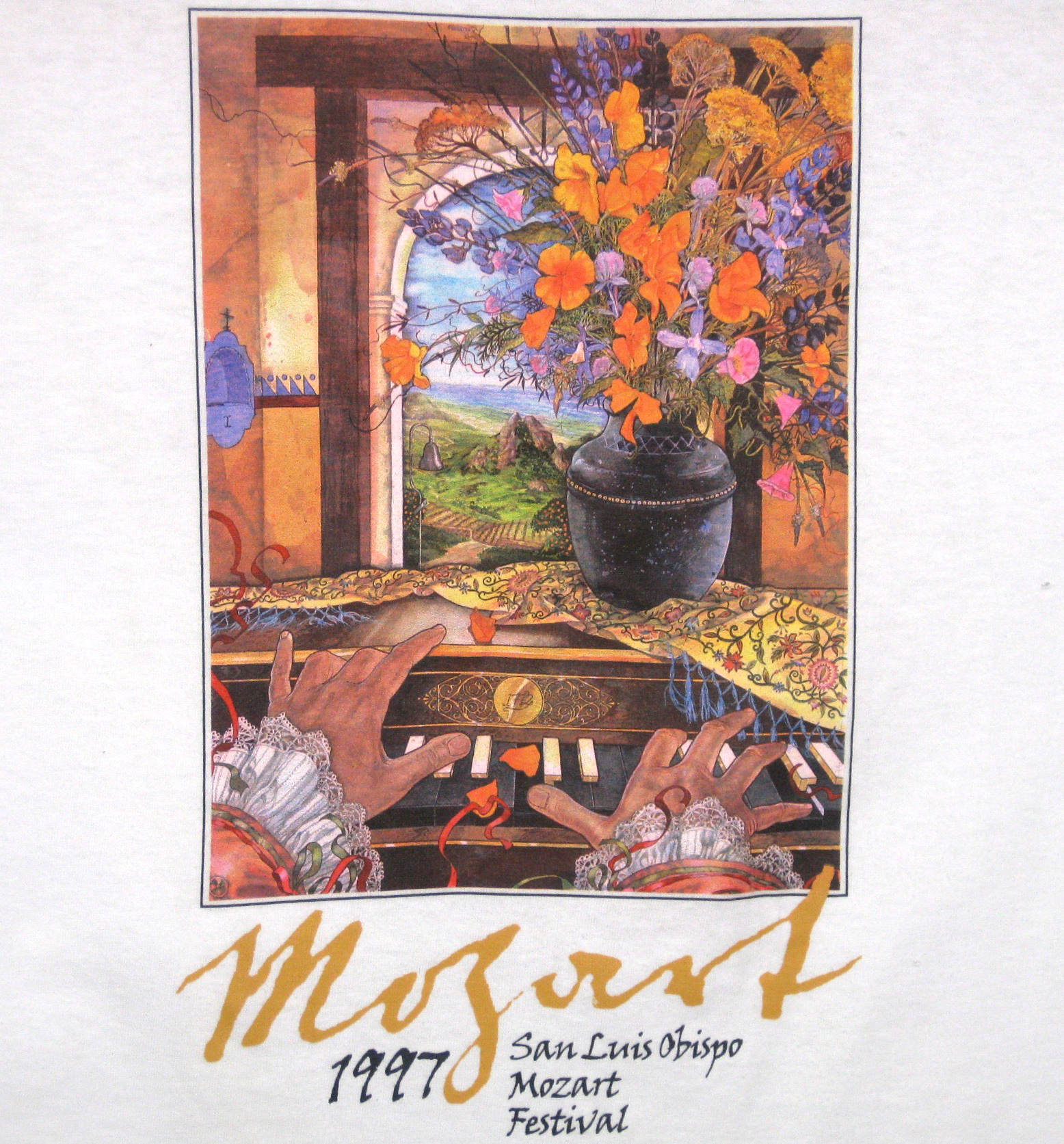 The proliferation of decorated apparel has been mainstream for decades. When I first entered the business in the early ’70s it was common to be criticized for getting caught up in the T-shirt fad. We’re long past that point. We’re now at the stage where you can’t go anywhere in public without seeing dozens of people in printed shirts.

That’s exactly the problem we face. Printed images have become so common that they’re nothing more than added noise. They completely blend into the environment. So common as to be literally invisible in the mind of the consumer. The images simply don’t register at scale.

The cure for this has been to extend the print technology and application methods. The hope was these new methods would somehow make the garments stand out more. They did, but only briefly before the next wave of techniques appeared. More noise being added into the landscape.

It’s not just printed apparel. It’s all forms of advertising and marketing. It happened with radio, television, print, direct mail, and now the internet. The consumer is bombarded with thousands of messages a day across all channels. In fact, there’s a term to describe this – omnichannel, or all channels at once. We face the same competition for attention all forms of media face today. Is there a solution?

Today is the Best Time Ever for This Decorating Medium

Today we live in the Age of Personal Expression. For the first time in the history of the world, everyone can become a publisher and share their message with the universe. Thanks to the internet and social media, everyone with something to say has a platform. This is the opportunity – and it’s incredibly exciting.

If 22-year-old Kylie Jenner can become a “self-made” billionaire utilizing Instagram, there are no limitations. In fact, the only limitation is your own mindset and self-imposed thinking about what you really do.

One of my all-time favorite TED Talks is from Simon Sinek in 2009. It’s called “How Great Leaders Inspire Action.” In it, he says:

“People don’t buy what you do or how you do it. They buy why you do it.”

If you haven’t seen it, Google it. It’s been watched more than 45 million times and is now the third most watched TED Talk of all time. This talk has spurred a virtual industry for Sinek; He’s now published multiple books including Start With Why.

You might be asking yourself, what does this have to do with me? There’s no better way of expressing what a person believes in than with a printed shirt. We’ve known this for decades beginning with Ban the Bomb in the ’50s and anti-Vietnam War shirts in the ’60s. Lifestyle, rock ‘n’ roll, and political and social causes rank right up there in perennial interest as well.

At the same time, automation was coming to our industry. Plastisol had been invented in the late ’50s and was entering the market, making shirt printing much easier and in higher volume than ever before. This launched the T-shirt craze that became the industry we know today.

In the beginning, there were a few companies that really got it. Certainly, Disney and the iconic Mickey Mouse shirt have been there from the beginning of mass manufacturing. For many years, Mickey Mouse was the most printed of all T-shirts and has now logged billions in sales with more than a billion printed. Regardless, the general public was only marginally aware of the branding and marketing potential.

By the late ’70s, Starkist Tuna produced more than one million Morris the Cat shirts featuring its iconic 9Lives cat-food feline and RJR Reynolds created more than five million Joe Camel shirts. (My company was involved in the tail end of the Morris the Cat promotion.) 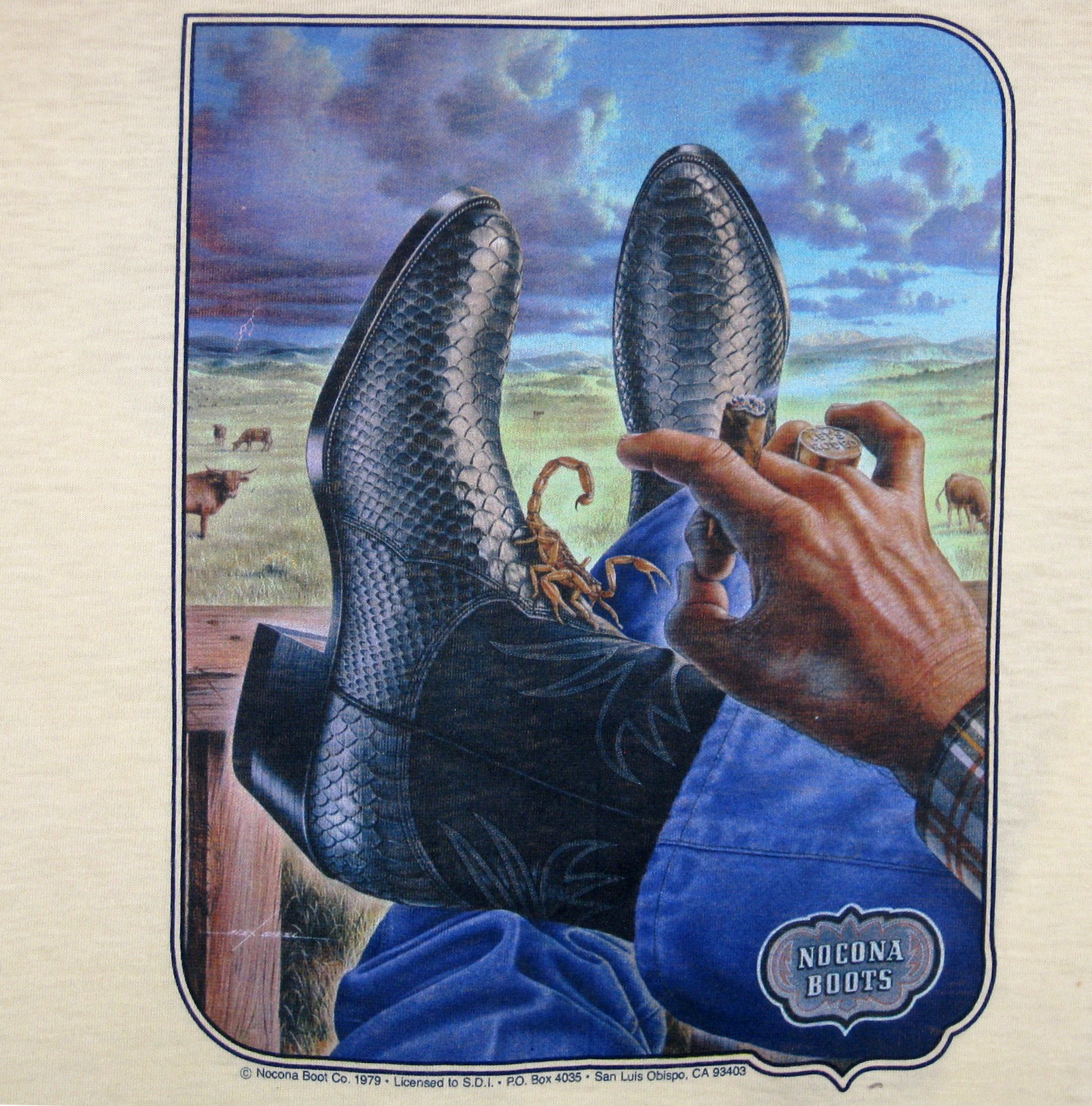 Then came a pivotal event that has become legendary among early screen printers. This was the Nocona Boot design produced by the Ackerman McQueen Agency in Oklahoma City for the Nocona Boot Company.

Pioneer four-color process printer Bill Wainner made the first four of the images that became the 12-design series. What made these images so significant was the design complexity and the story each image told for the company. They were masterfully art directed and illustrated by the incomparable Alex Ebel. At the time, each image was purported to have cost $25,000 to create.

Every image in the series portrayed someone in Nocona Boots in a seriously threatening situation. Because they had Noconas on, they were never in any danger. They portrayed threat, confidence, determination, and reliability – all things the company wanted to be associated with. Even 40 years later, the campaign is vividly remembered. 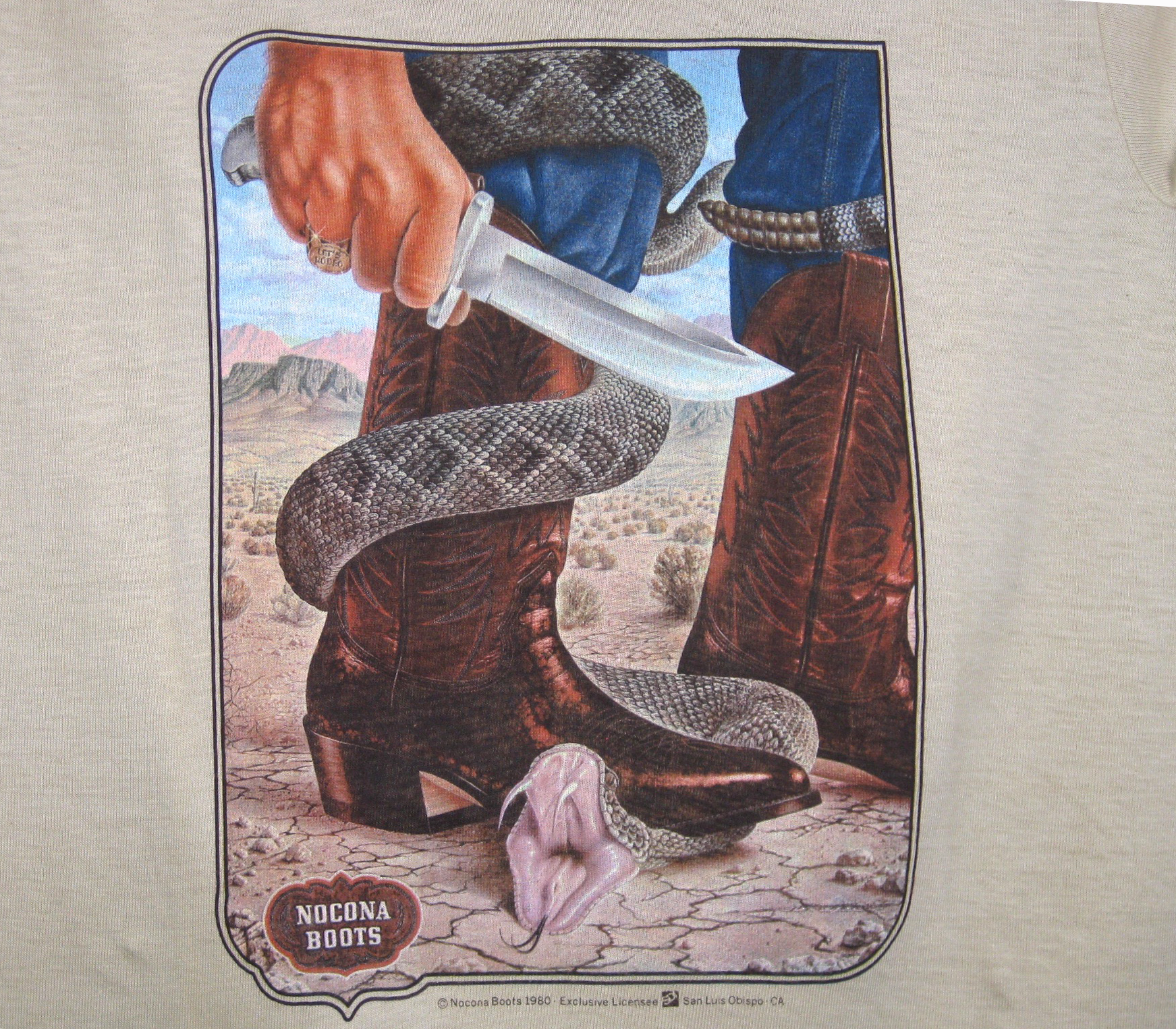 Over the years there have been millions and millions of shirts produced. Sadly, the majority have completely missed the potential they hold for their sponsors. The marketing people will decide to do a campaign, the art department will throw together a quick design, and the RFP will go out from the purchasing department. The buy will be made based on the lowest bid and another potentially promising campaign gets delivered with mediocrity.

All this is changing in a very good way. In the last several years there’s been a noticeable shift in marketing and advertising. For the last 100 years or so, the focus has been on the product features and benefits. That no longer works. There’s a shift happening, and decorated apparel is positioned perfectly to take advantage of it.

My first glimpse of this came with a pivotal event in 2008. I was attending a marketing conference in Los Angeles where 400 professionals paid $3000 to attend. The theme was Reinvent Yourself. I was selected to present the “T-shirt Makeover.”

The presentation began by asking how many in the audience made radio media purchases. About a third of the audience raised their hands. The next question was “In a metropolitan market of one million, how much would a 30-second drive time radio spot cost?” There were many answers ranging from $600 to $3000 per spot.

After a few seconds of stunned silence, the replies to the questions began to appear.

The reveal was this form of media does indeed exist and has for many years. It’s been largely ignored because it was being considered from an extremely limited point of view. The form of media is decorated branded apparel. You could hear a pin drop for the next 30 seconds as the audience considered the possibilities. Mild hysteria broke out as these experienced marketers began to connect the dots.

What followed in the next decade was only a tepid engagement of the concept. A number of unfortunate
timings kept the idea from being broadly utilized. The chief proponent was the Great Recession just beginning to grip the nation. Ad budgets were slashed and even established programs and budgets were canceled. By the time things started to recover, few of those present at that conference remembered the presentation or the possibilities.

By 2016, a major shift was happening with the big advertising brands. Companies like Nike realized they could not retain engagement for campaigns that focused on what they did and how they did it. They could only engage and hold the audience by taking the position of “Brand Purpose.” They had to focus on a bigger purpose that was more universal. From the “Just Do It” slogan, Nike’s mission statement evolved to “Nike Brings Inspiration and Innovation to Every Athlete in the World.” It did not say anything about shoes, sports, or equipment. It was a bigger vision that will never be filled.

The famous creative director riCardo Crespo spoke of the power of Brand Story at ThreadX in 2018 and the theme continued into 2019. Brand activations have become very popular. This is where live garment printing is done onsite at branded events and the attendees can either participate or watch as shirts are printed right in front of them. Pop-up stores with live printing and create-your-own graphics using transfers and DTG have become popular as more and more retail locations are looking to recover abandoned retail space lost to the Internet.

All of this revolves around the concept that every T-shirt tells your story. By including the attendees in the participation, it becomes an event they will never forget. They created the shirt and they leave with the medium that will bring back the brand connection every time they put it on for as long as the shirt lasts.

This isn’t about slapping a piece of art on a shirt. The industry has been doing this for years. This is the next evolution. It borders on performance art and it creates an incredible opportunity for apparel decorators who are working in the marketing space. It will take creativity and a new perspective to realize this opportunity.

This opportunity centers around the ability to tell the story the image on the garment represents. Rather than all the attention on complex imagery and graphics, the emphasis is on the associated story.

There are tremendous resources to learn how to do this. The most popular and widely used is Donald Miller’s Building a StoryBrand. The bestselling book leads to a free website where you can create brand scripts to develop your stories. If you really want to explore the nuances, you can take the four-day certification course and become a Certified StoryBrand Guide. This is a very popular avenue for marketing companies and agencies today.

Whatever direction you choose, there are fresh new avenues to explore. Even in our commoditized and hyper-competitive industry there are new profit opportunities that are not subject to offshore competition and race-to-the-bottom pricing. The door will not be open forever, but there is opportunity for those who act quickly and embrace the potential.

Mark A. Coudray is an industry pioneer with 47 years of technical expertise and leadership. He is a multiple Swormstedt Award winner in both technology and business, is a member of the Academy of Screen and Digital Printing Technology, and is a Certified StoryBrand Guide.

Give Back - Ohio University and Sudara offer real

TikTok: Turning Followers Into Customers There’

Why Aren’t There More Women Leaders in Screen Pr

Happy Holidays from the team at Screen Printing ma

5 Tech Tools for Your Print Shop - Deciding which

Celebrate the inaugural Women in Screen Printing A

Welcome to the New Age - We’ve shifted our resou