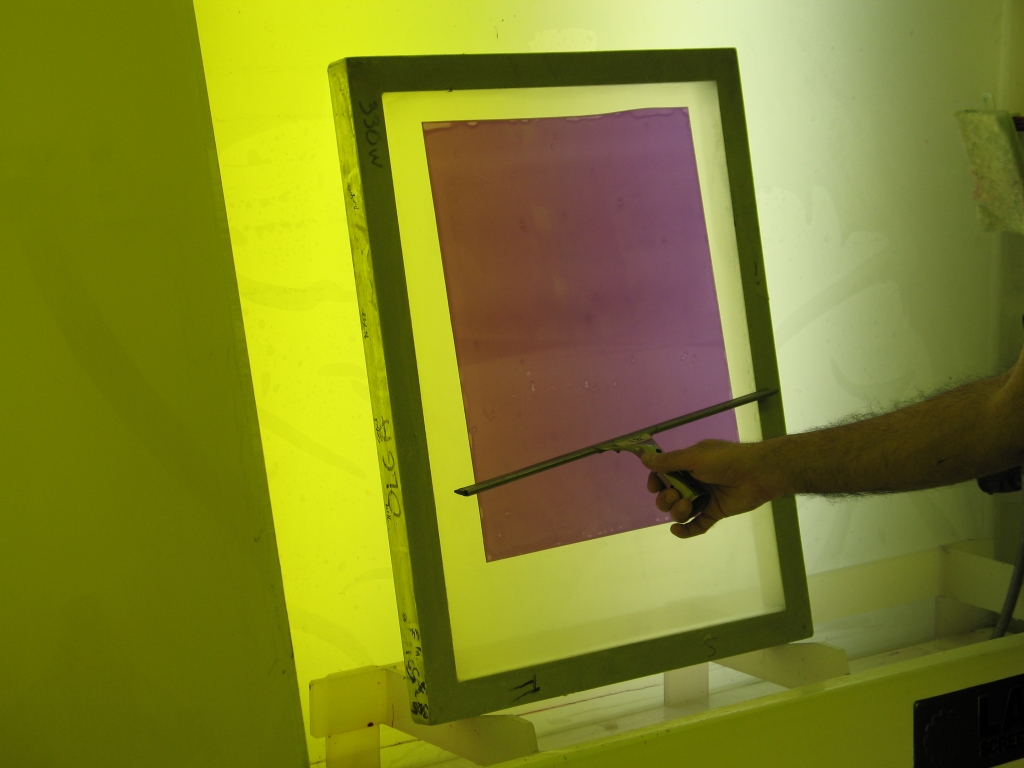 Despite the demonstrable savings of capillary film over direct emulsion in reduced labor time, faster stencil throughput, fewer touchups and makeovers, and ease of use, the perceived comparatively higher material cost per given stencil area has been a significant hurdle to the wider use of capillary-film stencils.

Despite the demonstrable savings of capillary film over direct emulsion in reduced labor time, faster stencil throughput, fewer touchups and makeovers, and ease of use, the perceived comparatively higher material cost per given stencil area has been a significant hurdle to the wider use of capillary-film stencils. This scenario is particularly true in the competitive, cost-conscious imprinted-sportswear segment of the garment-printing market, where many resist arguments that the material cost differences between one stencil system and another represent only a small part of total production costs.

Ulano formulated its EZ-FILM specifically for imprinted-sportswear applications and designed the capillary film to be a cost-competitive film alternative to direct emulsion. Part of the cost savings, according to Ulano, comes from coating the new formula on a thinner, less costly polyester, which the company notes also adds the benefit of improved adhesion.Another cost-saving measure is the film’s availability in only two industry-standard, pre-cut sheet sizes: 15 x 17 in. (381 x 432 mm) for manual printing and 17 x 24 in. (432 x 610 mm) automatic presses and one thickness appropriate for the range of mesh counts (110-156 threads/in.) most commonly used for imprinted sportswear. These limits reduce inventory requirements and, according to Ulano, have enabled the company to price EZ-FILM aggressively and attractively—within pennies of liquid emulsion—making it an attractive option for screen shops of all sizes.

Besides pricing, other benefits Ulano cites include fast processing and exposure,
quicker drying times compared to direct emulsion, minimal training required for effective use, reduced labor time and production costs, consistent stencil thickness, better control of ink deposit, and more. EZ-FILM can be adhered to mesh with plain water or with Ulano’s QTX emulsion for increased durability. Ulano specifies run lengths of 10,000-30,000 for water-adhered EZ-FILM and 50,000-70,000 when adhered with a compatible emulsion.

EZ-FILM can be used immediately following the degreasing rinse, eliminating
a drying step. Ulano says the film’s compatibility with wet processing eliminates virtually all pinholes. EZ-FILM is pre-coated by Ulano to a tolerance of ±1 micron (0.0004 in. or 0.01 mm) to enhance EOM (emulsion-over-mesh thickness) consistency and repeatability in exposure time, ink deposit, and, consequently, ink curing and costing. Capillary film also is known to be forgiving of uneven fabric stretching, whereas
direct emulsion will coat thicker on lower tensioned areas, with the predictable
loss of control of exposure time and ink deposit.

According to Ulano, EZ-FILM sells for about half the price of comparably thick, competitive capillary films. The result, the company says, is a capillary film that is at or very near material-cost pricing parity with direct emulsion on a square-area basis, thereby making it the first viable alternative to direct emulsion for imprinted-sportswear printing. The films are packaged in boxes of 50 pre-cut sheets. For more information, contact Ulano Corp., 110 Third Ave., Brooklyn, NY 11217, 718-237-4700, e-mail: [email protected], Web: www.ulano.com.