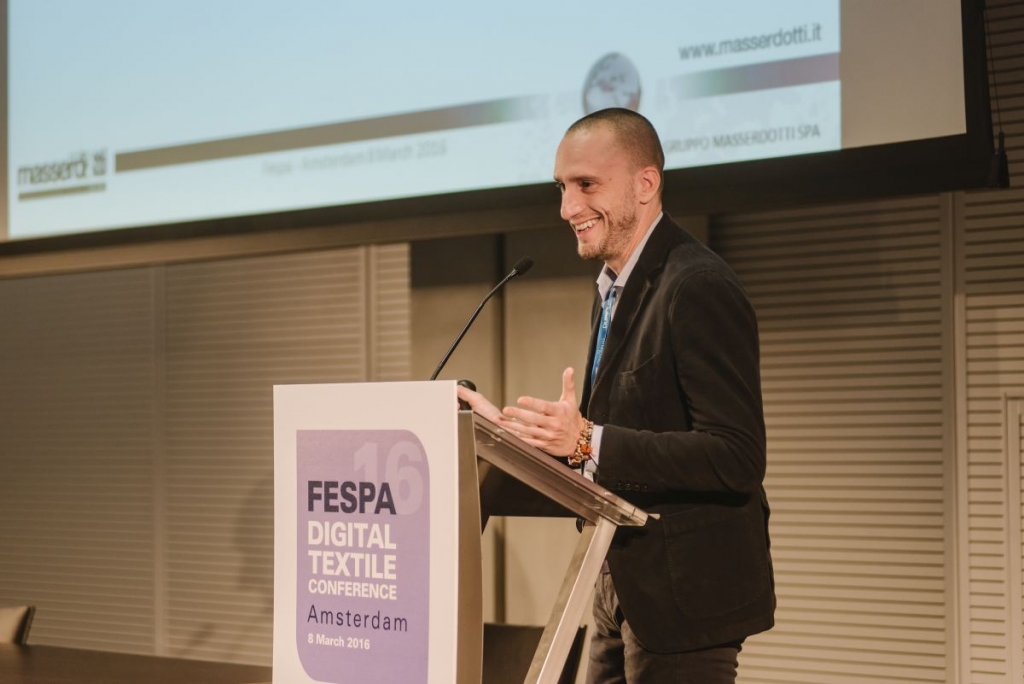 FESPA will hold its next Digital Textile Conference on 30 September 2016 in Milan, Italy. The event will be delivered with the support of the FESPA Italia Association and in close collaboration with Sistema Moda Italia, the Italian Fashion and Textile Federation, and Associazione Italiana Disegnatori Tessili, the Italian Textile Designers Association, both of which will field speakers. The event is also sponsored by MS Italy.

FESPA will hold its next Digital Textile Conference on 30 September 2016 in Milan, Italy. The event will be delivered with the support of the FESPA Italia Association and in close collaboration with Sistema Moda Italia, the Italian Fashion and Textile Federation, and Associazione Italiana Disegnatori Tessili, the Italian Textile Designers Association, both of which will field speakers. The event is also sponsored by MS Italy.

The one-day conference builds on the success of a series of FESPA-led Digital Textile Conferences which have taken place over the course of the last eight years. These conferences have been designed to help members of FESPA’s global speciality printing community realise the growth opportunities in digital printing on textile substrates for a range of applications.

FESPA Digital Textile Conferences offer a focused environment in which to learn and network, both for printers already active in digital textile printing and for those still seeking to explore the opportunity. The September 2016 conference programme will provide print service providers with insights into the diverse market segments of digital textile printing, feedback from printers who have successfully entered the sector and technical guidance on how to address the opportunity, including updates on the latest technology developments in machinery, software, inks and textiles.

The FESPA Print Census, results of which were published in May 2015, clearly indicated textile as the dominant growth application for the community, with 81% of printers at that time seeing growth in this segment, the highest of any growth application. Digital technology was identified as the key enabler, with over 50% of respondents expecting digitally produced garments to become an important alternative to traditional screen printing in the next two years. Textile printers featured prominently in investment plans, with 21% of respondents specifically focussing spend in this area, supported by 12% planning to acquire thermal transfer equipment. Decorative and industrial textile applications also featured heavily, with 78% of those surveyed reporting growth in textiles for décor applications. Textile substrates were continuing to make inroads in the signage and graphics space, with 67% observing sustained growth in soft signage.

FESPA has collated further feedback from its community since the March 2016 FESPA Digital exhibition in Amsterdam, which incorporated FESPA Textile. Responses indicate that digital textile printing is now of immediate interest to nearly two-thirds of wide format printers, with 40% already printing on textile, and a further 20% actively interested in entering the sector. Fashion and garment printing was indicated as the primary area of interest, followed by interior decor and soft signage.

FESPA CEO Neil Felton comments: "A year on from the FESPA Census, printers are turning interest into action, as we saw from the tremendous buzz in the FESPA Textile halls in Amsterdam a few months ago. Today, digital accounts for only a small proportion of all textile printing, but this is forecast to grow substantially in the years ahead, with estimates suggesting that digital could account for 5% of textile printing by 2020, up from 2% today. Clearly that’s a significant diversification opportunity for printers already invested in digital output technology and supporting workflows."

The choice of Milan as the location of the next FESPA Digital Textile Conference reflects the significance of Italy, and the Como region in particular, as a centre of European textile manufacturing and decorating excellence, accounting for 55% of the European digital textile market and producing more than 180 million square metres of digitally printed textiles in 2015. (Source: Fibre2Fashion)

Registration for the Digital Textile Conference is open to any printer. Full details of the conference programme and delegate registration can be found at www.fespadtc.com.

NPES to Host ‘Tango! A Graph Expo Party,’ Open to All Show Visitors and Exhibitors

Check Out the Latest Screen Printing Products for January-February

NJ Screen Shop Gets Its Big Break with Celebrity Partnership

Check Out the Latest Screen Printing Products for January-February

How Screen Printers Can Upskill Their Staff