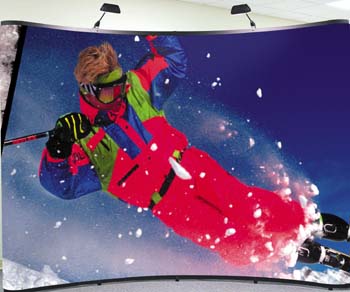 Facebook is about as far as it gets from screen printing, unless you count press operators and screenmakers checking their updates every five minutes in the middle of a job. Digital vs. screen printing is one thing, but Facebook—that’s a whole other media dimension from print.

Facebook is about as far as it gets from screen printing, unless you count press operators and screenmakers checking their updates every five minutes in the middle of a job. Digital vs. screen printing is one thing, but Facebook—that’s a whole other media dimension from print.

Last year, an ad appeared from Facebook headquarters. It showed a person washing out a screen in a print studio. This piqued my interest, and through some friends, I was able to get in contact with Ben Barry, a designer at Facebook, who built and heads up their Analog Research Lab, buried deep in the bowels of the company that has literally changed our world and the way we communicate.

The Facebook Analog Research Laboratory is a screen-printing studio and workshop at Facebook. The primary goal and use of the space is to create and develop projects for internal culture at the company. The main collaborators in the lab (Ben, Everett Katigbak, and Tim Belonax) all studied design and are employed as designers. They also just happen to be printers who have a love for making things. The lab started organically as a way for them to put this creative energy back into the company they’re so passionate about. I asked Ben to explain how the screen-printing and Internet-based social media, two completely different worlds, somehow come together.

“I think it’s a mistake to see them as two separate worlds,” Ben says. “Especially two at odds with one another. Both are about communicating information and connecting people to ideas and each other. These are basic human needs regardless of medium. To me, both Internet and print have a role to play in the future. It’s important to recognize when it’s appropriate to use each media. The Internet is obviously superior at information distribution, especially when it’s temporal in nature. Because it’s less efficient and more labor intensive, printing should be thought of less as a mechanism for information distribution, and more as a way to elevate certain ideas or content in their importance. Producing high-quality printed material in a day and age when it isn’t the most efficient way to communicate is a signal of how much someone cares about an idea.”

The posters and printed pieces Ben and his crew create (Figures 1 and 2) for internal use are very popular with co-workers and management, and used not just at the main headquarters, but in satellite offices around the world, and at conferences and events. He can’t make them fast enough to keep up with demand, and his job as a designer has transitioned to the point he is spending more time in the lab pumping out prints than designing. They are building a larger and better-equipped lab space in their new campus in Menlo Park, and he sees the demand increasing, not slowing down. One measure of their desirability is the recent appearance of knockoffs of internal Facebook posters on Twitter.

I was curious where he first learned about screen printing. “My first exposure to screen printing was through a class in college. I took it through the textiles department. Its focus was on using screen printing to produce fabric-based artworks and did not teach me how to produce multiple-edition prints on paper. I did attempt it, however, and my final two projects for the class were posters (three and eight colors, respectively). I printed editions of about 15 of each without hinge clamps. In retrospect, it was insane. I really learned to screen print posters properly during my internship at The Decoder Ring in Austin, TX. Working closely with my screen-printing mentor, Paul Fucik, I learned to print things the right way.”

Their setup at the Lab is nothing fancy. Ben designed and built an exposure unit and washout booth. The screen press is a simple manual one. They also have a letterpress, guillotine paper cutter, and laser cutter. I wondered why a company that is on the cutting edge of technology, with money to burn, wouldn’t have a couple of digital printers.

“We did just get a RISOgraph digital duplicator,” he replied. “It’s incredibly fast (130 prints/min), and the way it works and its output quality is very close to screen printing. You still print one color at a time and layer inks just like you do in screen printing. The limitations are the size (11 x 17 in.), and the colors are limited and expensive. So for me, screen printing is at the sweet spot of being incredibly efficient, affordable, high quality, and creatively flexible. Quality is very important to me, and with the exception of the RISO I haven’t found a digital printer that comes close. The letterpress we have is arguably much higher quality than screen printing, though, but it’s very slow, and the inks are nasty to work with. I haven’t found anything other than screen printing that allows me to have an idea, and within a few hours, design, print, and distribute hundreds of large, high-quality posters. Until I do, I’ll be a screen printer.”

Ben’s perspective on screen printing’s role in the future of modern media is instructive. He saw it contracting in quantity, but expanding in quality. “I don’t believe print will go away, but what does get committed to physical form in the future will be increasingly done in only the best ways, for the most important content,” he says.

Andy MacDougall is a screen-printing trainer and consultant based on Vancouver Island in Canada and a member of the Academy of Screen Printing Technology. If you have production problems you’d like to see him address in “Shop Talk,” e-mail your comments and questions to [email protected]