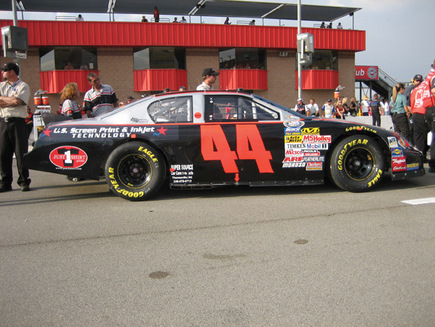 The ability to pull off a last-minute garment-printing job recently landed the logos of Jonesboro, AR-based Just1Shirt and U.S. Screen and Inkjet Technology, Phoenix, AZ, on a NASCAR vehicle. Richardson/Netzloff Racing, a NASCAR team, contacted Just1Shirt’s Mark Francis with an immediate need for race shirts, and the job was produced immediately on the shop’s Fast T-Jet garment inkjet printer.

“After we did the first order, Richardson and I talked quite a while,” Francis says. “He was interested in us doing more things for him. Then he offered to put our logo on the side of the race car. So I asked if he could also put the Fast T-Jet logo along with my logo since I’m printing all the shirts with the Fast T-Jet.”

With a minimum dollar value of $20,000 per race, the two logos get positions either on the hood and rear quarter panel or the front quarter panel, depending on the race. Richardson and Francis also have an agreement that Just1Shirt will produce all the race apparel for the crew, promotional giveaways, and merchandise that will be sold.