“THERE ARE MORE things in heaven and earth, Horatio, than are dreamt of in your philosophy.” There are a lot of firsts in this month’s column/podcast Episode 12 besides quoting Shakespeare:

Speaking of firsts, let me quickly introduce you to our first printer of electronic circuits, Paul Eisler. Trained as an engineer, escaped from the Nazis in the 1930s, invented the printed circuit, helped the allies win WWII, and transformed the world with the idea that print could be more than words and pictures on paper – it was also a manufacturing technology. Did I mention he was also a screen printer?

But hey, history is boring. Does anybody care about silkscreening in this internet-of-things, instant-delivery-of-anything, and pixel-pushing paradise we inhabit? My two guests today on Podcast Episode 12 still care! They and the companies they work for are carrying on the work of Eisler and many of the pioneers of the computer and digital age in the ’70s and ’80s, who used screen printing technology to make the hardware that ran the software that was about to change everything. Screen printing has remained the most adaptable, affordable, and available way to manufacture lightweight durable functional electronic components. And because of its unique characteristics it didn’t stop at circuit boards. As we rocketed forward into this hyper-connected world we live in now, the Human Machine Interface or HMI became one of the more interesting design and fabrication challenges during the change from mechanical switches and controls to digital PLCs, touchscreens, and now remote signaling. Machine to machine communication and control. Sensors and power cells. Flexible membranes carrying light and signals. Medical applications. All these different product demands keep pushing creative people to take ideas, use screen printing to solve the production challenges, and find ways to make them into something tangible and useful. Oh, and do it here, supporting local manufacturing in North America.

Screen printing is the core technology at E2IP. Using modern presses, they print a range of inks and pastes, some conductive, some graphic, all with precision and speed. Photo Credit: E2IP

Dr. Julie Ferrigno is one of those creative people. Originally from Marseilles, France, she has an engineering degree in Physics and a PhD in Electronics, sang in rock bands when she was younger, and works for E2IP.com in Montreal as an R&D engineer. Her company took home the top award for screen printed electronics at Printing United this year and if you need a primer on what they make – hell, what functional printing is all about – just kick around their website for 10 minutes and then listen to our discussion.

E2ip Technologies started as a family screen printing operation more than 30 years ago, and it continues to grow in both size and manufacturing prowess as Ferrigno and her team push the boundaries of traditional printing and manufacturing in Montreal, to serve North America, and Morocco, to serve Europe. Screen printing remains integral to their company, its ever-expanding range of products, and its growth as a supplier into aerospace, automotive, military, communication, and medical sectors.

At Creative Materials, experiments have produced light-emitting fabric inks. The intersection of electronics and textiles is considered to be one of the new frontiers of printed products. Photo Credit: Creative Materials

Our conversation in the podcast covers a range of topics that printers might find of interest. We talk about the growth opportunities that help E2ip continuously expand, where they find new customers, how they get workers with the skills needed, and some new projects they’re working on.

Ferrigno is also an in-demand speaker at tech industry events such as SPF 2022, hosted this year in Chicago, the first time in North America. SPF stands for Screen Printing Forever, where she shared knowledge with invitees on printing fine lines below 40 microns. Considering a human hair is approximately 70 microns, and she and her printers are hitting 20 in production, the lady and her team know how to screen print.

Dr. Julie described our second guest on the podcast as a wizard. This fits into my belief that screen printing is a bastion of alchemy in the modern world. If you didn’t know, alchemy was the name attached to an area of study certain people practiced behind mostly closed doors in ancient times. It evolved into modern material sciences, chemistry, and physics. Alchemists experimented with mixing base elements and processes in an attempt to make gold and many other things. Brian Violette is a modern day Merlin who has the title Applications Engineer II at Creative Materials, a company where they turn base metals and materials into a golden future for a who’s-who of companies all around the world.

Paul Eisler (1907-1992) was born in Vienna and graduated with a degree in Engineering from the Technical University of Vienna. Due to the rise of the Nazis and Eisler’s Jewish heritage, he was unable to find work. He started with others to create a weekly radio journal, and ended up working with printers and learned a bit about the process, which would come in handy later. In 1934, a failed coup by the Nazis was a foreshadowing of the horrors to come. He was able to get a visa to England based on some patents he filed as a student( graphical sound recording, and stereoscopic television) and work with Marconi. He soon put his knowledge of printing and electrical circuits together in the rapidly expanding world of radio. In 1939, he went to work with a printer in London who gave him encouragement and lab space, and he developed printable pastes, which could be applied with lithography or the new printing method called Screen Process, or Silkscreen.

By 1943, they had filed for patents on printed circuits, and gave presentations to the military and scientists from the allied countries. Interestingly, the British could see no use for this, but Americans saw the possibilities in mass production, and soon were put to use making proximity fuses in anti-aircraft shells and bombs. Of course this was top secret, so most of his inventions only came to light after the war.

Eisler continued inventing things. His work with printed circuits formed the basis of a world-wide electronics industry, but he never became rich. “At the time, my main aim was not to amass money, but to help in beating the Germans,” he said.

So, here’s the thing that a lot of people inside and outside printing have trouble wrapping their heads around. How the hell can “printing” make a cell phone or a solar cell? The simpletons and the suits who tell us printing is dead in the modern world (except for 3D and digital of course!), have also failed to grasp the hidden world of manufacturing that creates those products, along with thousands of other devices, controls, and sensors. A company like Creative Materials, and people like Brian develop a wide range of inks, pastes, adhesives, and more that can be applied, mostly using screen printing. Visit their website creativematerials.com and spend a few minutes or an hour looking at the screenable products they make, and more importantly, the devices and components that are manufactured from them.

The transformation of controls from mechanical switches to pressure-activated Human Machine Interface, or HMI, is one of the most common uses of functional print. This is a controller for a hospital bed. Photo Credit: E2IP

Inside almost every handheld device, layers of conductives, touch screens, control markings, and adhesives are screen printed and then combined. It’s a massive market, and growing. Photo Credit: E2IP

Brian’s job is to work with customers in the electronics, communications, medical, and manufacturing sectors, take their ideas, figure out solutions, and help turn them into reality. He gives us good insight into some of the more exotic inks they create, and the types of customers they sell to. We learn why screen printing continues to dominate the sector, and why it will be there for a long time.

Both of our guests and their respective companies, one a supplier of printing materials, and the other a manufacturer using them, are great examples of many businesses in North America who are reversing the trend that saw so much advanced functional and industrial printing and associated manufacturing going to Asia in the ’80s and ’90s after being invented here. We lost some of the skills and desire to make the products domestically, but now we are getting it back in waves as globalization unravels and people like Julie Ferrigno and Brian Violette and their co-workers pick up the thread. Screen printing was there when it started and continues to lead the way forward. 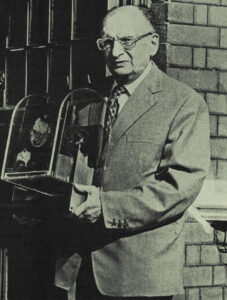 Printing United Expo Is Back – But It’s Missing Something

What Does 2023 Hold for Printed/Flexible Electronics?

How to Start a Silk-Screening Business from Home

Orbus’ Cassandra Chiodo Named to PPAChicago’s Board of Directors