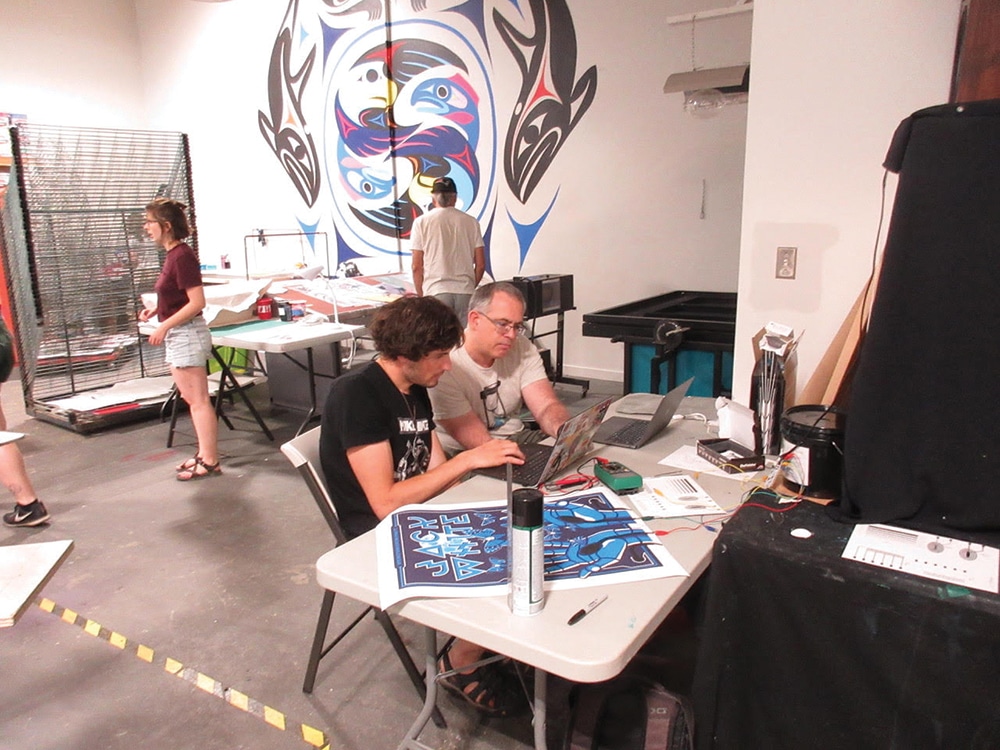 Adrian Granchelli, education coordinator at screentheworld.org, and Julian Rendell, tech wiz and sponsor from Make-It Zone, tested and tweaked code for a day and made the Theremin effect louder, more distinct, and easier to use.

BUCKLE UP MY FRIENDS and fellow serigrafistas. We’re going to hop on the magic flying squeegee and visit a few sectors of our exclusive under-the-mesh world in anticipation of the upcoming PU print-a-palooza in Vegas. Finish reading and then visit the podcast. We’re on Episode 11.

First off, let’s finish up and report in on Dr Frankenstiles, Squeegeerama, and the electric poster project from Episode 10. Find out if a gaggle of hosers using hokey, local, low-tech screen equipment, with nothing but a thickness gauge, inner tubes, and some barley therapy after work can bring dimensions of sound and light to the lowly poster.

Adrian and Julian also tested the conductivity and resistance in various patterns and lines. Old hat for the electronics industry, entirely new ground for gig posters.

Secondly, printing functional inks precisely is harder than it looks. At the end of our experiments, we learned how much we don’t know, and what we need to do better. In this (and upcoming) podcasts, we’re talking to a few people who are involved in functional printing and manufacturing in North America to see what’s going on in their corner of the screen-printed world. We speak with manufacturers of the specialized equipment and materials, scientists, engineers, and printers – are people still using screen printing for advanced manufacturing in North America? Is the market growing? What are some of the challenges?

The big news of course is that Printing United is back in Las Vegas. Barring fire, pestilence, war, canceled flights, or the complete collapse of society, there’s a good chance many of us will return, like the swallows to Capistrano, or the perpetrator to the scene of the crime. I’ve been going to this convention, as a printer, then manufacturer, then showing up for the ASDPT lunch and making bad jokes with old friends for nearly four decades. 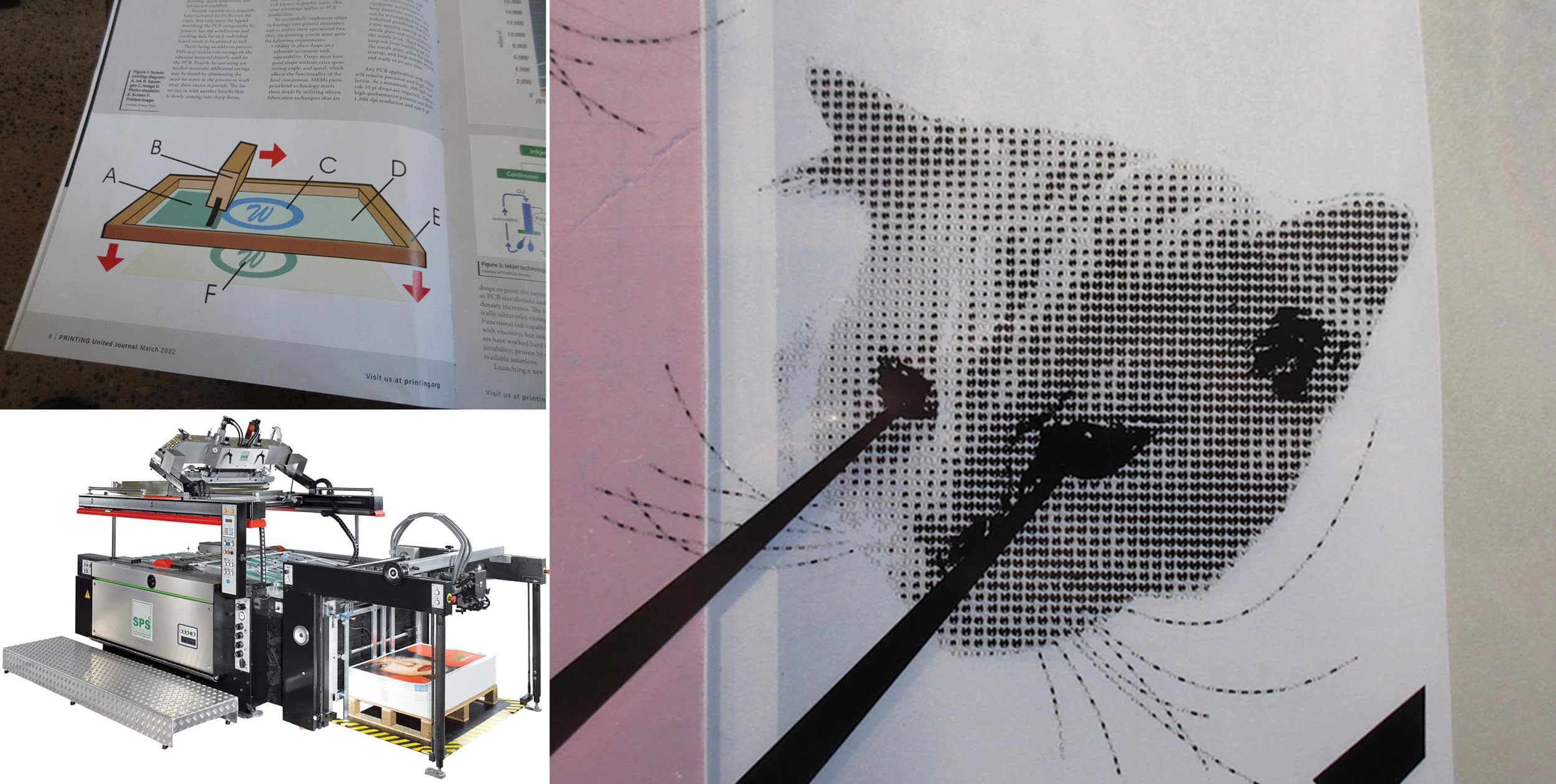 Is it silkscreen, or slick screen? Can you spot the difference? One photo is the example for screen printing shown in a recent Printing United Journal article on functional and industrial printing. The other is what the grown ups play with in today’s modern manufacturing facilities. 4000 iph. You can check them out at Printing United Expo in Vegas and learn about the modern uses of the ancient technique.

Like the old hometown, a lot has changed over those 40 years. As a screen printer, I might have disagreed occasionally with the direction of the organization in the new century, but it’s a testament to the original founders and the screen printing industry who, over the last 100 years, have driven the “print different” mentality that makes up our DNA in 2022. Today’s print world is so much more than words on paper. It gets into all these different manufacturing segments that continue to require print to grow. All that electronic crap from Asia that we’re going to start manufacturing (again) in our own back yard? We need to master print production and automation to make it happen. The new energy systems, medical devices, planes, trains, and electric automobiles? The same. We need print more than ever in society. Ironically the organization was founded to assist and educate the practitioners of the screen process as they didn’t have the resources or clout of the mainstream printing establishment. Seventy-plus years later, the tattered remains of what in the 1990s was the single biggest employer by industrial category (printing) in the US has now flocked to the renamed and rebuilt tradeshow that is the direct linear descendant of the original Screen Printing Association.

I don’t mind that we now have offset, jiffy, pad, gravure, letterpress, and those pesky digital printers roaming the halls. And I try to control the urge to snark when the uninformed stop to look at a cylinder press and ask where the T-shirt goes. I wish we had more hands-on educational opportunities for attendees, but at least they brought back the Apparel Zone. Maybe all the other print processes that are part of Printing United don’t need educated workers anymore, but those I know on this side of the squeegee need education. It’s not a lack of work that holds us back from growth and profits, it’s a lack of knowledgeable workers. Education is the key. 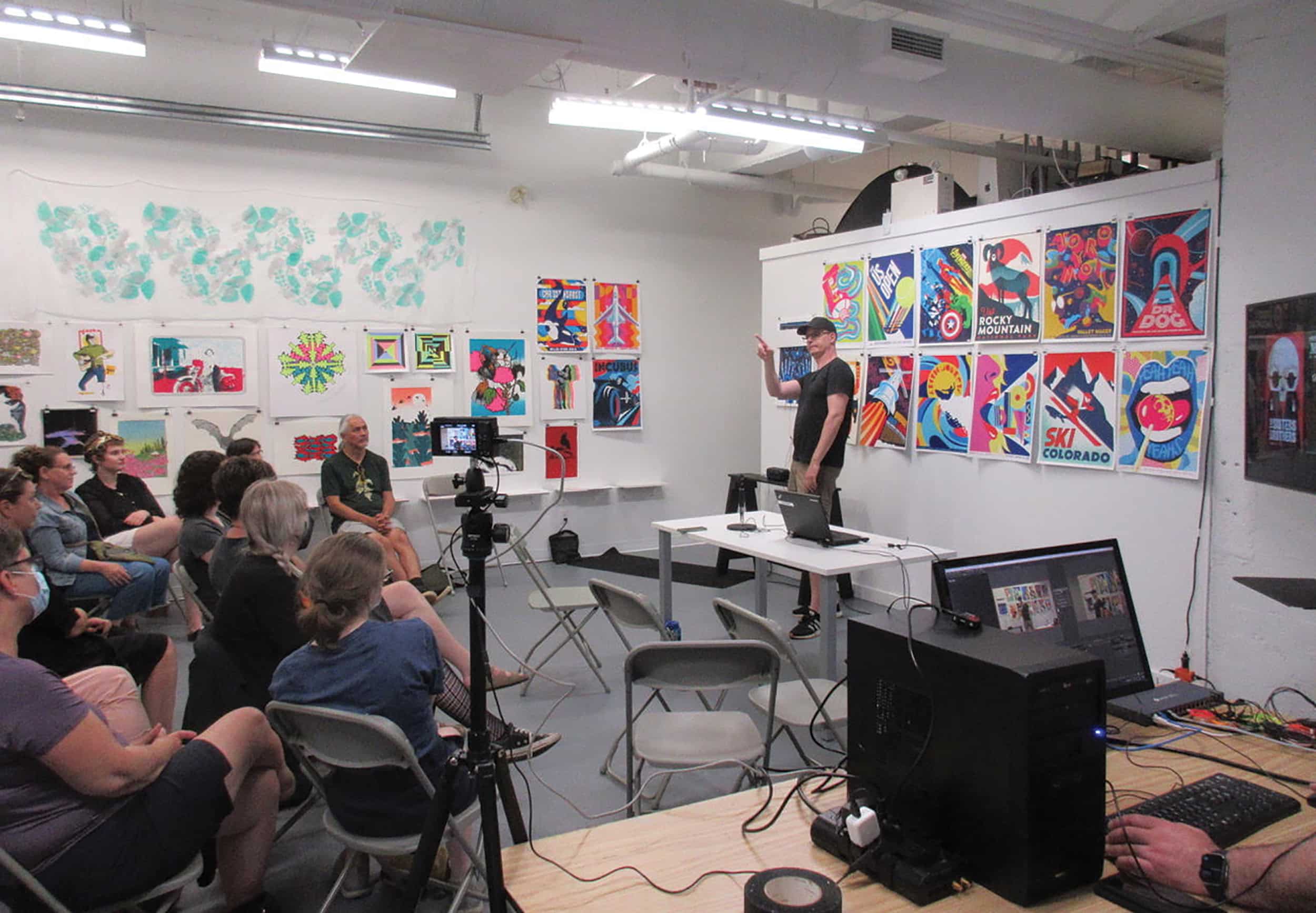 The Comox Valley Art Gallery hosted an artist talk by Dan Stiles, and Wachiay staff dug through the flat files for a pop-up show of past Squeegeerama-created artworks. The gallery liked it so much, they invited the Wachiay crew to leave the show up until the fall, and invited Squeegeerama 2023 back next year. See Dan’s talk in the video – some practical advice about design, how he approaches it, dream clients, and chasing the concept of the electronic poster.

We tried two experiments. One featured a printed theremin-like instrument on a special edition for a major player. Movement of a person’s hands over the sensors could vary the pitch, volume, and sound. By tweaking the code – thanks to Adrian Granchelli of screentheworld.org and Julian Rendell, an electronics wiz from Make-it Zone down the block – it works really well. Local talent for the win. Check it out. The other uses Electro Luminescent inks. Check it out.

Andymac and Dan Stiles start burning screens as they attempt to bring sound, light, and screen printing together at Squeegeerama 2023, sponsored by Screen Printing magazine, Sefar, RH Solutions, and Creative Materials. Did they succeed?

Dan gave a great talk on posters, design, and the electric poster project, and then led a Q&A that should be part of any art/design curriculum. Have a look and listen. 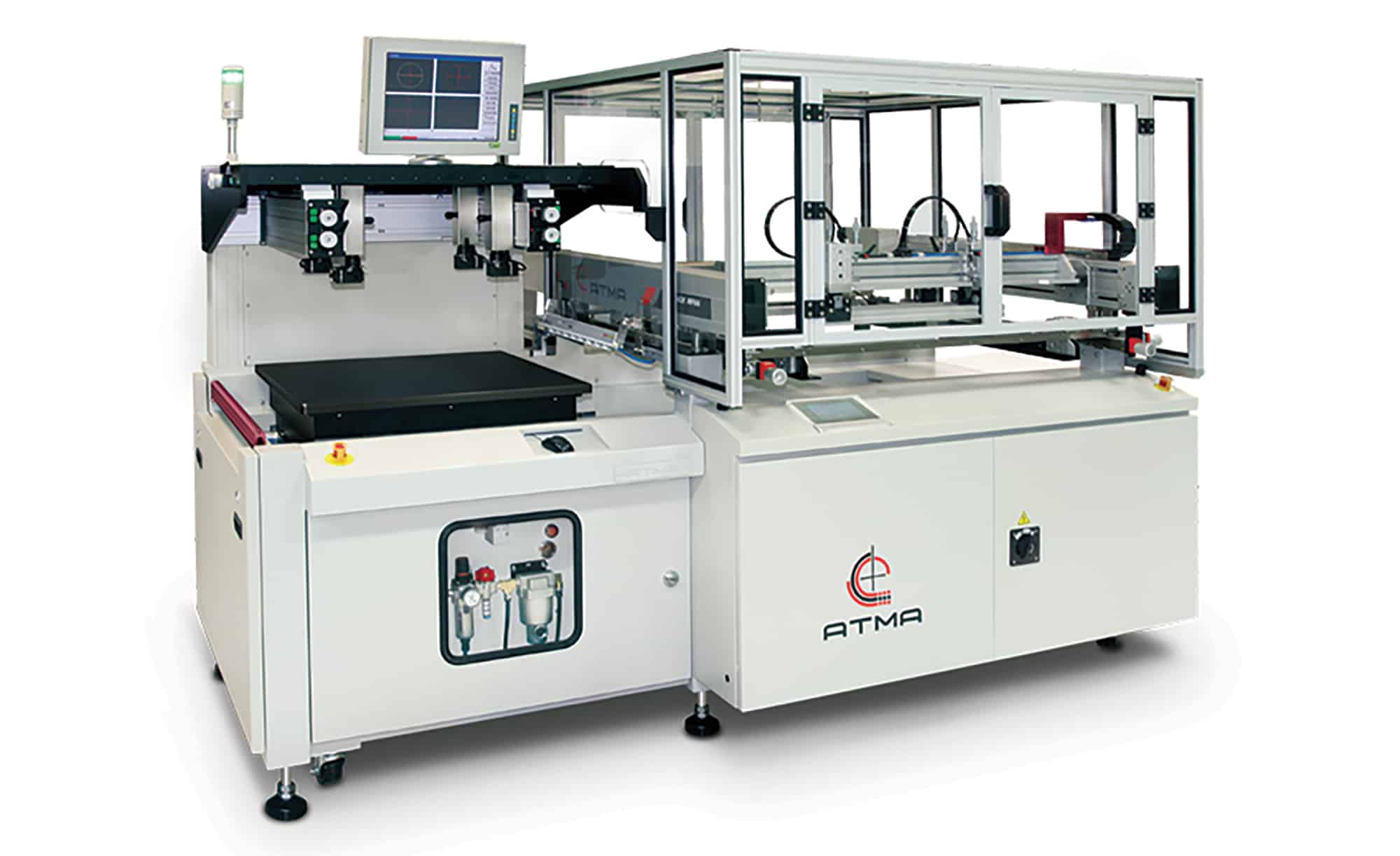 We can safely say screen printing (sp) invented the whole printed electronics field, but a recent article in The Printing United Journal continues a troubling trend where instead of delving into why sp and other analogue processes continue to kick ass (according to the story it’s the dominant player in printed electronics of an estimated $26.7 billion, where inkjet is at $6.2 billion and not showing the year over year growth of sp or other analogue processes), it presents the wonders of digital in glorious, full color photos, and sp is illustrated as a wooden screen with a hand squeegee – the same crap they use on Wikipedia that perpetuates the false narrative of an old, handcraft method of print. In the interest of fairness and truth, they could have shown at least one picture of a modern automated screen press and system. Instead, we get the party line of digital uber allies. I’m going to get into this a bit more in the podcast. If The Journal won’t tell the story, Screen Printing magazine will.

Look after yourself, stay healthy, and I hope to see you at Printing United. I’ll be at Rockin’ Ronnie’s Home for Wayward Screenprinters, booth #C6029. Squeegee spoken here. 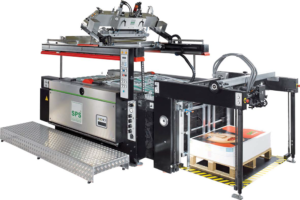 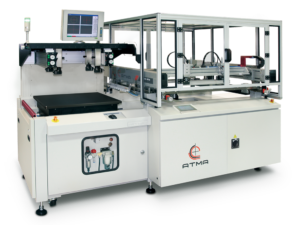 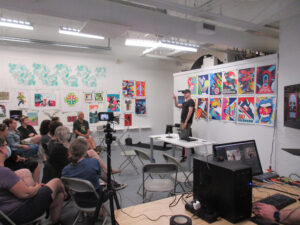 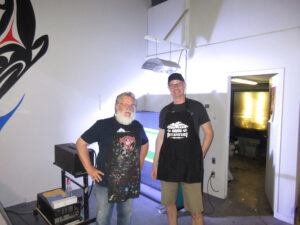 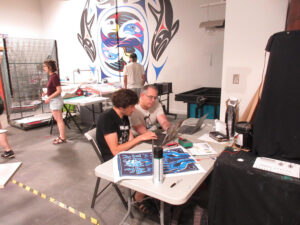 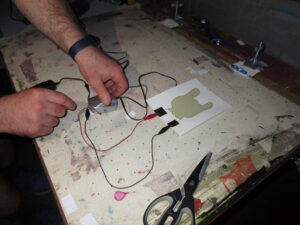 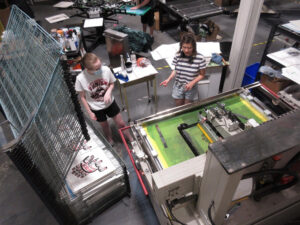 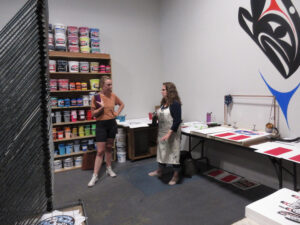 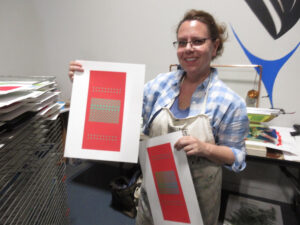 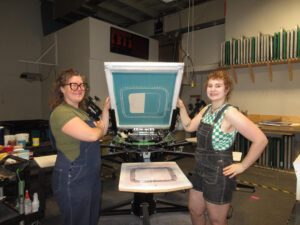 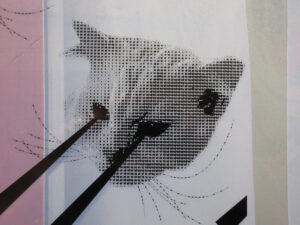 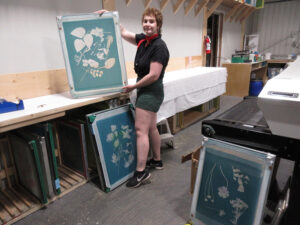 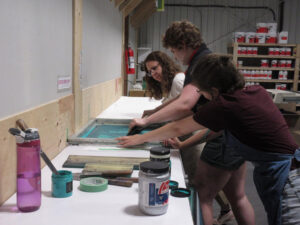 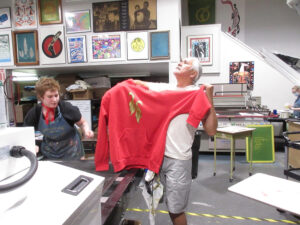 Related Topics:andymacFeaturedPrinting United Expo
click to Comment(Comment)
Up Next

Meet the Engineers Who Are Expanding the Applications of Screen Printing

Squeegeerama 2022 and Dan Stiles Partner for an Electric Event