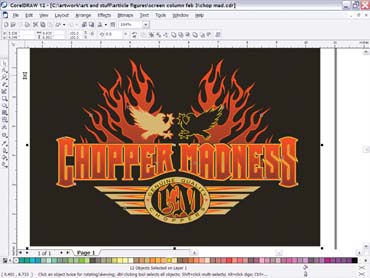 The worn-out, vintage look for garment graphics is hotter than ever. Customers want the look and feel of a shirt that they have had for years. Thanks to some simple tricks in graphics programs like Adobe Illustrator, Corel Draw, and Adobe Photoshop, you can easily create and edit graphics so they’ll come out aged in no time. The key to this look is to have a variety of ways of accomplishing the effect so that it’ll work with the image that it modifies. I think it’s a mistake to apply the same distress effect to every design without considering how the final composition will work.