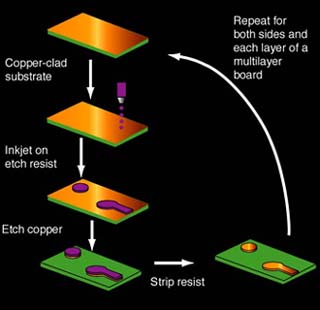 In the world of wide-format graphics, 2003 is something of a landmark year. It marks the tenth anniversary of when digital printing, mainly in the guise of 200-dpi electrostatic and 300-dpi inkjet printers, first seriously entered the wide-format graphics market as a short-run production technique. Originally, by using high-cost specialty media with inappropriate inks and toners printed by plotters never designed for graphics applications, repro houses, photolabs, newly emerging graphics-service bureaus, and other digital-print providers were able to create and serve a new market, as well as existing display-graphics sectors.

While wide-format photography quickly felt the impact of digital printing, there was no immediate fallout for the traditional, commercial wide-format reproduction methods of screen and offset printing. The printing world essentially divided itself into two extreme camps. The first consisted of fundamentalist screen and offset supporters who ridiculed “this digital stuff” as slow, expensive, and incapable of achieving traditional requirements for print quality at realistic price points. On the other side were the digital evangelists who claimed that screen printing and other traditional processes would be annihilated by digital printing. We at Web Consulting believed neither of these extreme views, and therefore found ourselves somewhat damned by both groups, having to preach opposing gospels to different manufacturers and user groups to achieve some balanced perspective.

Now, ten years later, the reality is that digital printing–particularly with inkjet technology–has grown massively. Nonetheless, even today it accounts for little more than 15% of the total wide-format graphics production globally. Digital imaging hasn’t destroyed the screen-printing industry, although it has siphoned off some growth that screen printing would otherwise have been likely to capture, and it created certain new graphics business opportunities.

Two years ago, inkjet technology once again started to nibble at the edges of graphic screen printing. And with the recent rapid emergence of systems with less media dependence, such as flatbed UV and low-cost solvent-based inkjet printers, digital printing shows signs of biting off yet more market share.

One of the most significant consequences of digital-printing technology has been its effect on the mentality of graphics screen printers themselves, who no longer treat growth in market demand with an automatic response to invest in new screen-printing equipment. They might invest in screen, digital, or offset, depending on their application requirements. The name of the new game in town is “flexible production.”

When a primary new technology is invented and developed, it may take many years to find its way into robust commercial products and applications. If, for a moment, we think about revolutionary technologies such as lasers, microprocessors, electrophotography, and liquid crystal displays, they all took around 30 years to achieve maturity. The concept of inkjet printing was first described by the UK’s Lord Kelvin in the 1860s, and the German scientist Hertz developed some inkjet breakthroughs in the 1930s. But we owe much of current wide-format inkjet development to the boom in new thermal- and piezo-printhead technologies first developed in the late 1980s for office printers. It is fair to assume that inkjet printing still has a long way to go and that its success will not be confined to the home and office sector, wide-format graphics, and marking and coding in the packaging industry.

In the overall market for wide-format graphics, inkjet has already become the number four technology by volume of prints, following screen printing, offset lithography, and computer-aided signmaking. Inkjet is the number two generator of profits for graphics-industry manufacturers and distributors. At Web Consulting, we predict that inkjet will eventually rank first by value and second by volume.

This vision of the wide-format market is old news to the many “traditional” suppliers to the screen-printing, offset, and photographic sectors, who have already started to cross into digital technology. These suppliers, now actively supporting inkjet technology, include such companies as Sericol, NazDar, SunJet (Coates/Sun Chemical), Jetrion (Flint), Heidelberg, Ilford, Kodak, Fujifilm, and many others and join the ranks of the early digital innovators, such as HP, EnCad, 3M, and Rastergraphics (now Oc