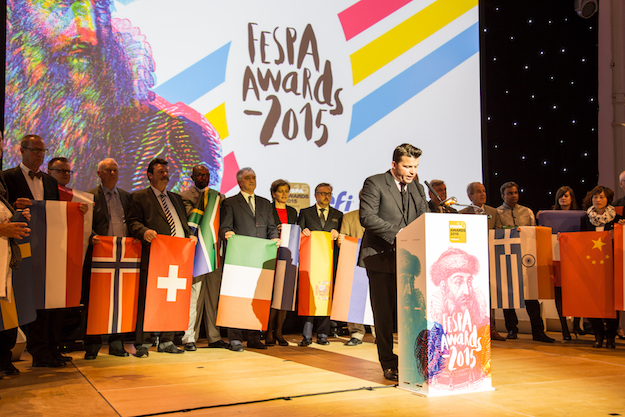 FESPA has launched its call for entries for its 2016 Awards, marking the start of its search for pioneering and innovative projects in the print industry.

FESPA has launched its call for entries for its 2016 Awards, marking the start of its search for pioneering and innovative projects in the print industry.

Entrants have until the 29th January 2016 to submit their work which will be judged by an independent panel of global industry experts.

Outside of the application-led categories, there are three separate awards: Young Star, Best in Show and People’s Choice.

The Young Star award is open to an employee or student in a print related discipline aged between 16 and 25. Best in Show is decided by the judges, across all the shortlisted entries, for the piece of work that offers the most outstanding example of print. The People’s Choice award is voted for online by the FESPA community. Voting will open on the 15th February 2016.

FESPA has long been a champion of printers and young designers and this Awards programme is an opportunity to showcase some of the world’s most exciting print creations.

All shortlisted entries will also be exhibited at the RAI Amsterdam, The Netherlands, during FESPA Digital 2016 from 8-11th March. The winners will be announced in front of an elite audience of global industry experts at FESPA’s Gala Night on Wednesday 9th March at the historic Beurs van Berlage in Amsterdam.

"I am pleased to announce FESPA is again looking for ambitious printers to compete for the now annual FESPA Global Awards," said Duncan MacOwan, Head of Events FESPA.

"This is the 33rd year we have run the competition and expect the calibre of entries to be just as great, if not greater, than in 2015. Print service providers are the life-blood of the print industry, and I look forward to meeting the finalists, and congratulating the winners, at FESPA’s Gala Dinner."

"The FESPA Awards are a great way to showcase the success and creativity of print across digital, screen and textile disciplines. It is a platform to inspire our global print community and to motivate other printers to push the boundaries of print."

"Winning a FESPA Award offers significant credibility to a print business providing the perfect platform to showcase their skill and expertise, which enables printers to instil confidence in their customers and support new business ventures."

"Last year’s FESPA Best in Show winner, the Markthallen-Rotterdam from TS Visuals, was a prime example of this kind of innovation. The larger-than-life mural conveys the desired effect using Valspar’s coatings and a sublimation printing process on 4,000 perforated aluminum panels.¨

The FESPA Awards judges were similarly impressed by the creativity and technical excellence of the print. Josep Tobella comments: "TS Visuals’ project is a novelty of creative cooperation. The uniqueness of the application is a major drive for this technique fulfilling customer needs. It’s a true proof that design creation in solid partnership with technology can reproduce almost unlimited ideas."

For more information, the full list of categories or to enter the FESPA Awards 2016, visit: www.fespa.com/awards

Related Topics:
Up Next

Nominations Open for the 2016 Managing for Improvement Award