WHILE UV LED curing in the digital printing space has grown significantly over the past decade, most screen-printing operations have continued to use traditional curing technology. The primary obstacle wasn’t the readiness of the technology, but the cost. Until recently, LEDs were expensive, and the need in a screen-printing line to cure the full width of the print at once meant that many more LEDs were required compared to a wide-format inkjet printer. This tended to limit early development in the screen-printing industry to containers and other smaller formats where equipment cost was less of a factor.

Now that the costs have come down, the economic, environmental, and safety benefits of the technology have captured the interest of screen-printing companies, equipment manufacturers, and ink developers. Although relatively few new screen-printing presses are being built, a growing number of companies would like to replace their old mercury vapor curing systems with UV LED units.

Over the past five years, the power of the lamps used in UV-LED curing systems has more than doubled, the physical size of the lamps has been reduced, and costs have come down. Mike Higgins, director of sales, Americas, for Phoseon Technology, estimates that retrofitting a 20-inch-wide conveyor five years ago would have cost four or five times as much as it does today: “You’re getting a proven curing system at a fraction of the cost.”

Here are five facts you should know about UV LED screen printing. 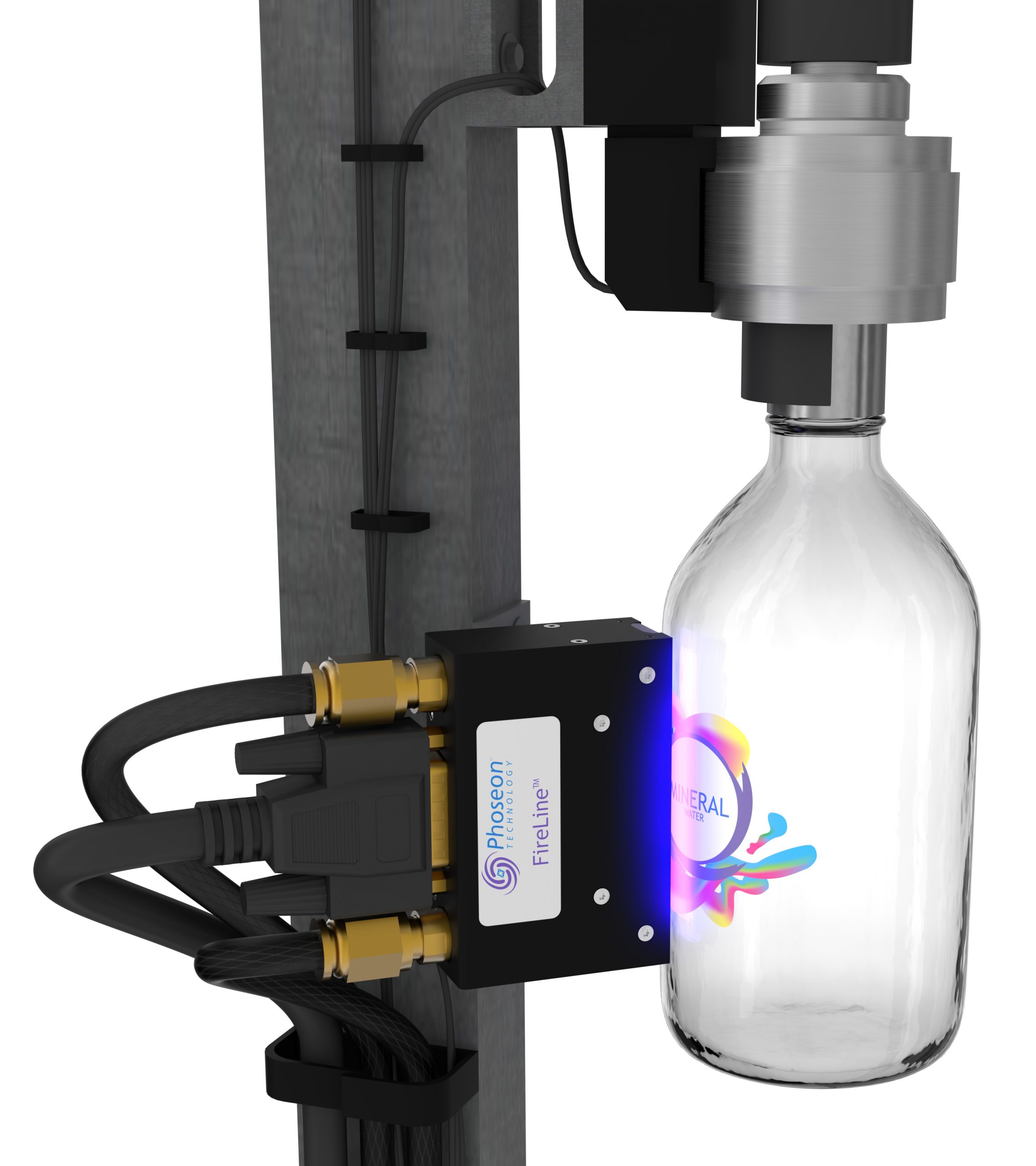 Traditional UV lamps produce light by generating an electric arc inside an ionized gas chamber (typically mercury). After the atoms in the gas chamber are excited, they decay and emit photons. Mercury arc lamps produce light across the full spectrum of ultraviolet light (from 100 nanometers [nm] to 1800 nm). In addition to UV-A rays, this includes harmful UV-B and UV-C radiation that is hazardous to workers’ eyes and skin.

According to Higgins, mercury lamps run very hot, which can cause heat-sensitive printed materials to warp and wrinkle. Plus, mercury UV curing systems generate ozone that must be vented away from the work area. Using LEDs to cure UV inks doesn’t generate ozone – nor does it transfer a lot of heat to the printed surface.

UV LED lamps are solid-state semiconductor devices. They produce light by generating a voltage to join positive holes with negative electrons, emitting energy in the form of photons. The light is focused within a narrow spectrum of ultraviolet wavelengths. Phoseon LED curing units produce light only within the UV-A range, with wavelengths of 365 nm, 385 nm, 395 nm, or 405 nm.

Unlike mercury lamps that need time to warm up and typically run all day, LEDs provide energy instantly and can be switched on and off as needed. Print shop employees can turn off the LEDs every time they take a 15-minute break; some units are configured so the LEDs turn off between prints, providing further efficiency. LED curing units are expected to operate for more than 20,000 hours compared to less than 2000 hours for a mercury arc lamp.

UV-LED curing systems are offered either in air-cooled or water-cooled packages to ensure that the LEDs operate at a consistent junction temperature (the highest operating temperature of the semiconductor) during production and withstand harsh production environments. Phoseon has
been making patented LED solutions for life sciences and industrial curing applications since 2002. For the printing industry, they make UV-LED curing systems for inkjet, screen, and narrow-web flexographic printing systems.

2. A Growing Number of UV LED Inks Are Available

In order to take advantage of UV LED curing, you need inks that are formulated to cure within the high UV-A wavelengths produced by the LED lamp. UV LED screen inks include photoinitiators that absorb the specified UV-A wavelengths needed to ensure a full cure at the desired speed.

As the benefits of UV LED curing have started to be proven in real-world applications, screen-ink manufacturers have followed this trend by introducing formulations that enable more screen printers to use the technology.

Each new ink formulation must provide the desired curing performance at the speed of production, and must also meet the adhesion and durability requirements of specific applications.

According to Jeff Morris of Ruco USA, the performance of UV LED inks has been proven in the glass-bottle decorating business for more than five years. Because retrofitting industrial equipment can be expensive, buyers of glass-decorating or container-decorating equipment often specify UV-LED curing units when purchasing screen-printing equipment for high-speed, high-volume container decorating.

Here are a few of the inks currently available:

The Nazdar 2300 series of UV/UV LED screen inks are formulated to print on the glass and plastic bottles used to package cosmetics, household chemicals, and other products. The 2400 series is formulated for screen printing membrane switches. The 2600 series can be used to print graphics on the rigid substrates commonly used for P-O-P graphics and indoor/outdoor advertising. The 2800 series of UV/UV LED screen ink adheres to the vinyl used to make fleet markings and other durable decals.

Ruco 937LED inks are dual-cure inks that offer excellent adhesion to glass, ceramics, and metal, plus resistance to chemicals, water, and abrasion. They can be used for high-speed decoration of bottles and glassware that will be chilled or run through a dishwasher. Ruco 947LED inks are formulated for plastic containers, including PET, polyethylene, polypropylene, acrylic, and more. These inks are suitable for high-speed bottle decoration lines as well as semi-automatic machines. Ruco 955LED-LM is a low-migration, silicone-free formulation for the external printing of plastic tubes and hollow bodies used to package food or cosmetics. All Ruco LED-curable inks are certified by independent third-party labs to meet health and safety
requirements of CPSIA, California Proposition 65, and more.

Norcote LED First-Surface series inks are suitable for almost all graphic/P-O-P and plastic-container printing applications. They cure rapidly, provide a scratch-resistant surface when properly cured, and have good adhesion to a number of substrates.

Norcote LED MSK series inks were created for second-surface printing in industrial graphic applications. The inks are compatible with polycarbonate and treated polyester and most pressure-sensitive adhesives.

3. UV LED Lamps Can Be Built into Industrial Screen Presses

In 2011, Empire Screen Printing collaborated with Nazdar, Phoseon, and KBA-Kammann to develop the first roll-to-roll screen-printing press with built-in UV LED curing technology. Empire continues to use this Kammann K61 Eco-Press to produce rolls or sheets of outdoor-durable labels.

According to John Freismuth, president of Empire Screen Printing, UV LED curing improved Empire’s manufacturing process and allowed them to go from raw materials to finished goods in a one-piece flow. The company also likes the lower energy costs, reduced downtime, ability to print on a wider range of substrates, and ozone-free, environmentally friendly nature of the UV LED curing process.

Since installing the first unit in 2011 and converting a 6-color screen-printing press that used mercury lamps into a 12-color UV LED screen line, Empire has gone on to convert 75 percent of their presses to LED.

Omso makes equipment to print on different types and shapes of containers for the food, cosmetic, and pharmaceutical industries. They developed their ServoBottle machines specifically to use UV LED screen-printing inks. The first ServoBottle machines were delivered in 2012 and are used by bottle manufacturers and contract decorators around the world, the company reports. The machines can decorate 40 to 80 parts per minute and can be changed over from one type of container to another in about 40 minutes. Omso also manufactures ServoJet inkjet printing systems that print UV LED inks directly onto tubes and bottles.

Switching to UV LED curing enabled Omso to reduce the footprint of the bottle-decorating machine while lowering the maintenance costs and increasing reliability. The average scrap rate on ServoBottle technology is reportedly less than one percent.

According to Scott Frey, CEO of Omso North America, screen-printing companies that want to convert existing automatic presses to UV LED can achieve a return on investment in 24 to 36 months, depending on local energy and maintenance costs. He notes that, “With modern inks and ample UV LED output, there are few limitations to using UV LED screen-printing inks.”

Frey regards digital technology as complementary to the screen-printing systems: “Inkjet is meant for small runs with customized graphics and high-resolution images. It is doubtful that digital will gain a large market share in the text-rich graphics of packaging for personal care products, home goods, or pharmaceuticals.”

A powerful turbine holds down lightweight substrates while the chamber is air cooled. The LEDs have high megajoule and wattage output.
M&R reports the heat output from the LED is so low the cooling can be provided by the building’s ambient air. Exhaust air doesn’t have to be vented outside and replenished, which is a plus for clean-room manufacturing environments.

And because the system has no reflectors or rotating lamps, the Photon curing unit is easier to clean and maintain, according to the company. The conveyor belt lasts longer because it isn’t exposed to as much heat.

According to Glen Carliss, M&R director of sales, the Photon curing unit uses less electricity because the LEDs are turned on only when sheets are being run through. “Since the LEDs are rated at 395 nm, you need to use inks with the corresponding photoinitiators,” he says. “Those inks tend to be a little more expensive.” Although some screen-printing companies have achieved positive adhesion results when they tried curing standard UV inks with the Photon, that might not always be the case. Carliss reminds printers to thoroughly test any ink before specifying it for an upcoming job.

5. Screen-Printing Shops of All Sizes Can Benefit

In addition to Empire, other well-known screen-printing companies successfully using UV LED inks include Screenprint/Dow, Serigraphie, and Nameplates Inc. (NPI). But UV LED curing can benefit smaller shops, too. According to Higgins, many smaller screen-printing operations face limitations in the amount of electrical power their shops can consume. If they reduce the amount of power they utilize in their curing lines, more energy will be available for other steps in the process. Plus, if small shops can replace a thermal oven that’s 50 feet long and 6 feet wide with a unit one-tenth that size, they can make room for other equipment.

Empire Screen Printing began investigating the use of UV LED curing after a company executive read about its benefits for wide-format inkjet printers in 2008. Since then, screen printers working with UV inkjet printers for shorter-run jobs have seen the benefits of UV LED curing on their inkjet systems. Higgins believes “The digital UV LED market has played a big role in proving the technology to the point that screen printers want to take advantage of the benefits and add UV LED to other equipment.”

Learning This Screen Trick is Just Like Printing Money

Nominations are open for the Women in Screen Print

21 Photos from the ROQ Adventure Summit The even

Sponsored: The Best Ink for the Best Print Use La

The 411 - A deep dive on apparel screen printing i

It’s the first anniversary of the Screen Printin

The May/June edition of Screen Printing magazine i

Sponsored: The Best Ink for the Best Print Use La