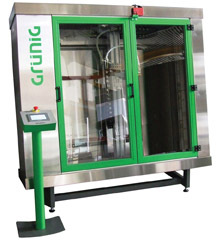 Sustainability and responsibility have always been key at Fed By Threads. The Tucson, Arizona, custom decorator has dedicated itself to providing American-made, earth-friendly apparel, while at the same time helping to feed the hungry and supporting non-sweatshop manufacturing – even as it’s gone through a number of shifts in its business model.

Sustainability and responsibility have always been key at Fed By Threads. The Tucson, Arizona, custom decorator has dedicated itself to providing American-made, earth-friendly apparel, while at the same time helping to feed the hungry and supporting non-sweatshop manufacturing – even as it’s gone through a number of shifts in its business model.

“We have the potential for huge growth and to turn a small idea into something much bigger,” says Skya Nelson, creative director and COO. “Our ultimate goal is to generate enough sales to show other, larger companies that there is money to be made in sustainable, responsible manufacturing and get them on board. That’s the win.” The key to making it happen lies in keeping the company focused on its foundational tenants and building on them, says the 30-year industry veteran.

Fed By Threads seeks to align inspirational garment designs with an inspiring way of doing business. Every aspect of production is closely monitored for its impact on the planet. Images courtesy of Fed By Threads.

When the business got its start in 2012, founders Alok Appadurai and Jade Bealle were selling T-shirts with positive, uplifting designs at their dance and yoga studio. Quickly recognizing that “cute and cheap” shirts purchased online and likely produced with sweatshop labor were at odds with its core values, the company determined to begin changing the impact of garment production on people and the planet. It switched to offering only responsibly produced, American-made, organic clothing free of heavy metal dyes, pesticides, formaldehyde, and other harmful ingredients. And in addition to “feeding the earth” by using sustainable materials and helping support living-wage garment jobs, Fed By Threads began donating a portion of each sale to provide meals to the disadvantaged.

Before long, the company branched into selling custom-decorated shirts from the studio, and later online, contracting out the printing. In 2014, Manish Shah entered the partnership, helping to boost apparel sales with his retail and marketing expertise. Despite solid response, particularly from millennials strongly identifying with Fed By Threads’ values, refining the operation and its approach to marketing and production remained a challenge.

When Nelson and his wife, longtime sustainable shoppers, happened to go into the studio in January 2016, they found themselves talking with the team for hours. Nelson soon jumped on board, buying out Bealle and partnering with Shah to further the emphasis on sustainability while increasing profitability. One of the first problems Nelson tackled was how to cost-effectively exemplify the business’s core values from top to bottom. This involved reassessing the elements of sustainability, refocusing the brand on a clearly defined target market, and developing improved pricing models utilizing contract printing and in-house design.

Sustainable Sourcing
“The manufacturing supply chain from ‘dirt to shirt’ to the people who make and wear the garments is all part of a single thread; it’s all interconnected and encompasses the entire ecosystem,” Nelson asserts. Fed By Threads tries to acknowledge the impact of each and every business decision, making amends by paying “offsets” when less-than-eco-friendly means are necessary. “Fuel for shipping would be an example of a ‘tree planting offset’ where we pay money to have a tree planted by organizations like carbonify.com,” Nelson says.

Sustainability is about more than recycling or establishing a fair minimum wage, he adds. “Being sustainable is really about taking into account that our resources are finite. There is a finite amount of cotton, a finite amount of water, et cetera, and there are brands that are treating those elements with almost a reverence because if you run out of them, you’re not going to be able to manufacture anything. Those are companies we look to partner with and support as part of our mission.”

In the garment world, this means knowing where the materials come from, how they are finished, and the conditions under which they are manufactured. “Our vetting process is extensive,” Nelson says. “I try to go back to the fiber. If it’s cotton, for example, I look for whether it’s grown in America and in what region, which can make a difference in how soft the fabric is. I also look for manufacturers that don’t use heavy metal pigments or dyes in their products. A sustainable, responsible manufacturing model is also important. I read what’s been written about the company, check for EPA violations, and check its Glassdoor.com reviews to get a feel for it from the inside. If possible, I like to actually visit the plant and see who’s making the garment and the working conditions.”

In addition to 100-percent organic cotton, which accounts for about 60 percent of its business, the Fed By Threads sustainable materials lineup includes bamboo, hemp, and an rPET recycled plastic/organic cotton blend. Bamboo is used primarily for upscale fashion garments, hemp as an alternative to organic cotton in applications requiring a little more durability, and rPET – which Nelson calls “urban cashmere” – for hoodies, sweatshirts, and specialty apparel.

While Nelson has no preference in fabrics for most applications, he finds the density of hemp gives it a touch similar to that of 6-ounce cotton with the durability of a heavyweight cotton. He also points out that even with a higher thread count, bamboo garments tend to weigh less than those made of organic cotton, making it possible to pack more units in the same size box. And bamboo breathes and moves well, but it calls for a thinner ink deposit to preserve its extremely soft hand, frequently making it a better choice for light-colored garments that don’t require an underbase for printing. On the other hand, organic cotton seems to offer more color choices, Nelson says, noting that the choice of fabric often gets down to the customer’s expectations. When custom dyeing is required, it is done by a sustainable house using soy-based formulations.

An End-to-End Overhaul
Several months after Nelson joined the Fed By Threads partnership, co-founder Appadurai resigned from the company for personal reasons. Nelson and Shah took over the operation and began to reexamine the company’s decorating processes. Its contract printing vendors were asked to use sustainable, non-PVC inks, green chemicals, and hypoallergenic sprays; they were given a six-month grace period to comply. “What we ended up with was some vendors who weren’t willing to change,” says Nelson.

Each size shirt has different neck label copy that reinforces the Fed By Threads message – Nelson calls it the company’s “emotional capital.” Printed five at a time on a custom platen prior to decorating, they help prevent sizing errors and are even requested as shirt-front graphics on occasion.

Thus began a shift to in-house printing. With four 4-color and two 6-color presses and an electric dryer, the goal is for 20 percent of the company’s printing to be done in-house by the second quarter of 2017, moving to 80 percent or more by the end of the year. New staff is being hired and trained for the green shop, which will continue for the near-term to use both plastisol and water-based inks to accommodate seasonal variations in the Tucson climate.

“Designing for screen printing here is like growing seasonal vegetables for an organic restaurant; you have to factor in the climate as well as the garment,” notes Nelson.

The company also revisited its growth and marketing strategies. After experimenting with the idea of creating an upscale shopping experience for their customers, the pair realized retail wasn’t the right path to take. “We discovered that the people who shared our values were willing to pay a premium for our garments, which basically sold themselves,” says Nelson. “The problem was that customers tended to buy fewer items less frequently.” The data supported a switch to custom printing exclusively, perhaps with an eye on returning to retail once the brand and customer base were established. The retail store was closed in December 2016, and work began on a revamped website with a custom printing focus.

They’ve also brought apparel industry veteran Pat Bojador on board as national sales manager to oversee a professional sales team with reps in California, Oregon, and Washington. “Using Bojador’s experience and that of Shah, a brand specialist who has been featured on MSNBC’s ‘The Profit,’ we’re moving beyond just emotional messaging to present a viable option to a targeted customer base. We’re succinctly explaining our mission and how it is carried forward in our products in a non-judgmental way that lets buyers know that we’re here as an alternative when they’re ready.

“We did our research and identified businesses evidencing a high level of corporate social responsibility, broke the list down by region, and prioritized them,” says Nelson. “And we’ve created three targeted videos to introduce our company and our mission to them.” The company currently has 574 corporate clients and 50 nonprofits, including Tucson Electric Power, Southern Poverty Law Center, and Comcast, as well as some 5000 other accounts. And while it is particularly interested in expanding its organizational sales, it is committed to continuing to serve customers ordering a few dozen units as well as those ordering several thousand. For this reason, it plans to incorporate DTG printing by the third quarter of 2017.

In keeping with its mission, Fed By Threads’ formal marketing programs are supplemented by a variety of community outreach and educational efforts. Besides continuing its longstanding participation in the Feeding America national hunger-relief organization – through which it has provided some 560,000 meals – and more recently its enabling of customers to earmark meal donations for local food banks, it has become involved in promoting interest in sustainable apparel. Efforts have included Nelson’s guest lecturing at the University of Arizona, working with Professor Nancy Spaulding to create an industrial sustainable garment program at Pima Community College, and serving as an incubator for young designers focusing on sustainable fashion. And in addition to designing and printing garments for the Museum of Contemporary Art Tucson, Fed By Threads is planning a pop-up boutique with the museum that will focus on green products.

“We believe our brand message and the story behind our value-based choices hold the key to the success of our company and our mission,” says Nelson. “Our ethos and emotional connection with sustainability are at the heart of all we do. The improvements and structure have been put in place to increase the likelihood of our longevity and provide livable wage jobs. It’s about social justice and doing the right thing for people and the planet. There are people that understand what we’re doing and are galvanized by it. They’re the clients we’re looking for, but we also want to provide customers of all types with the opportunity to take the first steps toward sustainability, and our shirts are the biggest selling tool for doing that.”

Read more of Barbara Montgomery’s articles in Screen Printing, or check out more from our February/March 2017 issue.

Related Topics:ArticlesFebruary/March 2017News & Trends
click to Comment(Comment)
Up Next