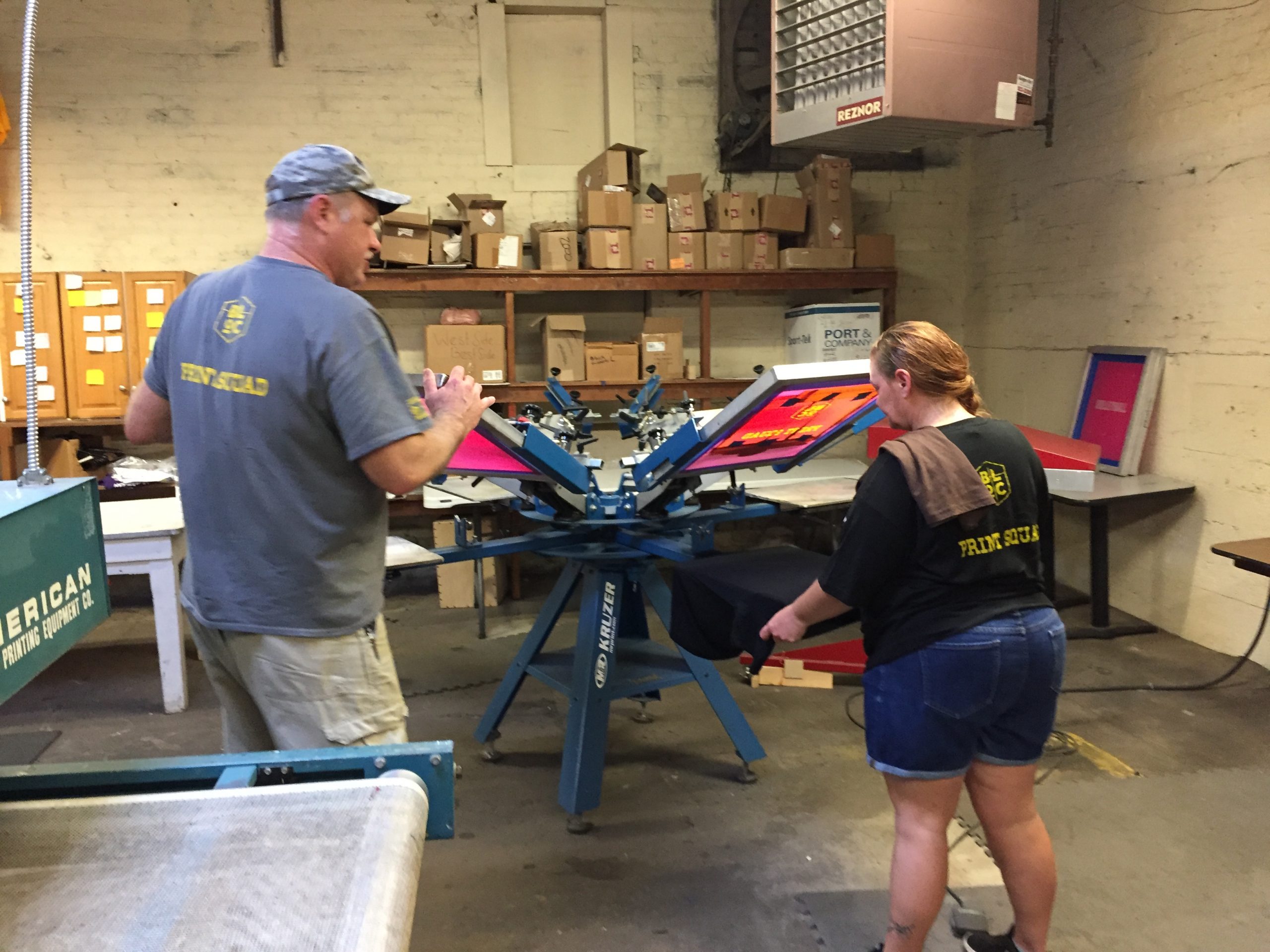 THE CREATION of one screen printing shop in Cincinnati didn’t happen with the typical money-making concept in mind. BLOC Screen Print, located in the city’s struggling Lower Price Hill neighborhood, was started with the goal of providing skills – and support – to people who have experienced addiction, incarceration, and other challenges.

The screen printing shop is one of many programs making up BLOC (Believing and Living One Christ) Ministries, a nonprofit Christian organization which seeks to rebuild local Cincinnati neighborhoods by serving at-risk children and adults through job training, recovery homes, arts and athletics programming, a soup kitchen, food pantry, and more. Full-time employees must reside in the neighborhood in which they serve. BLOC Screen Print’s director, Jim Green, moved from the suburbs he has always known to the urban Price Hill area near the shop, along with his wife, Karen, who now runs BLOC’s Redeemed Home, a transitional refuge for female survivors of addiction, trafficking, and prostitution.

The group of men or women working in the shop changes as the staffers graduate from the program, which typically includes 8 to 16 weeks learning skills and developing their work ethics at the screen shop and other BLOC businesses. “We tell them from the beginning that this isn’t where you are going to make a living,” Green says of the training program. It’s a first stop on the way up the ladder toward self-sufficiency. BLOC works with local organizations to help their graduates find full-time employment after they successfully go through the program. When Screen Printing’s associate editors visited, four women living in Redeemed Home were on staff.

“I knew that the stuff on T-shirts came from somewhere, but I didn’t know the process,” says Chrystal Mara, who joined the program with the standard part-time hours, was hired on full-time to help teach the new workers, and has since landed a full-time job outside of BLOC. “I didn’t have an education or a trade before I came into this program, and now I do. I can take what I have learned and take it outside and do something with it – and for that I am grateful.”

Green says some of the women were on the streets just eight or nine months prior to joining the program. “They have come far and they know they needed that support. In a lot of cases, BLOC saved their lives,” he says.

Before taking on the role of running BLOC Screen Print, Green was the owner of a landscaping business seeking his next step – which he wanted to be meaningful. He knew the founders of BLOC Ministries and was familiar with their programs. When founder and director Dwight Young called Green’s landscaping company to place an order, Green cited his plan to soon pass the business to his son and shared his own interest in mentoring and helping others. Young mentioned that he’d been floating the idea of adding a screen printing wing to BLOC Ministries’ job training programs, which also include a woodshop, coffeehouse, and the Cincinnati Type and Print Museum (which also teaches letterpress printing). “I said ‘I don’t know anything about screen printing, but I think I can run a business and I love the BLOC story,’” Green recalls.

The shop was started in 2016 with donated equipment, some of which has since been upgraded through continued donor support. With no prior printing experience, Green began to learn the craft by attending industry training programs, plus he got a crash course in screen printing from local shops that appreciated the BLOC mission. “They opened up their shops to me to show me, because they knew I wasn’t going to be real competition,” Green says.

More Than Just a T-Shirt

BLOC Screen Print operates a 6-color manual press, a conveyor dryer, and an exposure unit. Prior to having a climate-controlled screen room, the shop was trying to work with a 10 x 10-foot tented area, but in the humid heat of a typical Cincinnati summer, the emulsion wasn’t drying. As if on cue, a North Carolina youth group with construction experience reached out to BLOC Ministries to offer any type of assistance. The group built the main structure for the temperature-regulated space and drove it to Cincinnati, Green says. “In the beginning, we had to farm out everything and had a few weeks’ lead time on orders,” he adds. “Now, we can expose a screen within a half hour.”

Most of the shop’s customers are local churches, schools, and companies. They hope to build more business to keep their workers busy. “We aren’t the cheapest or the fastest, but it’s more than just a T-shirt,” Green says.

Each completed order is boxed up with an accompanying hand-signed thank-you letter from the current group of staff members, which reads: “Thanks to this order (and many others), we have the chance to learn a new trade, develop good work habits, and acquire life skills. BLOC gave us an opportunity when no one else would.”

Looking to the Future

Green touts the success stories of the people who have come through the shop, including one man who spent 18 years in prison and came to BLOC upon his release. With the life and work skills learned, he was able to land a full-time job, get his driver’s license, and buy his first car. “He changed his life,” Green adds.

Success stories are heartening, but given the dark starting point for many of the people in the training programs, there are also the sad stories of relapse. The initiative is making an impact, but it’s hard not to reflect on the people who slide back into their old lifestyles, says Gary Walton, who was involved in BLOC Screen’s launch, is BLOC Ministries’ director of print, and operates the letterpress museum;

Walton also taught graphic communication at Cincinnati State Technical and Community College for 45 years. “At Cincinnati State, 85 to 90 percent of my students go on to become very successful,” he says. “I came down here to this environment, and we average about 50 percent [success rate]. You get to know these people and then they go backward; it’s really hard. I have a hard time with ‘we lost another one.’”

Walton and Green are both passionate about the BLOC job training programs, they sing the praises of those who graduate and go on to full-time jobs, and they are looking to the future. “We have donated items in storage to start an entire offset printing department,” Walton says. “We just don’t have time to do it yet.

“Our goal is that two years from now, there will be 30 people here at the screen shop and 30 at the woodshop (next door) – that would be 60 people being rehabilitated,” Walton says. “When you do that, that’s how you flip this community. The idea is not to train them and get them to leave, but to stay and rebuild this community and have an impact on it.”

Related Topics:April/May 2019ArticlesCase Studies
click to Comment(Comment)
Up Next

For These Screen Printers, Almost Nothing is Too Difficult to Print On

If You Can’t Be a Musician, Be A Screen Printer

The Gift That Keeps on Giving. How three generatio

14 Surprising Things You Can Screen Print. When

Quick photo recap of the 2021 Women in Screen Prin

Attending ISS Fort Worth? Join us at Made Lab's la

13 Iconic Band T-Shirts That Will Strike a Chord w

7 Tips for Building an Online Community - It takes

Money-Saving Tips From design to communication to

Is UV LED Right for Your Screen Shop? Advances in