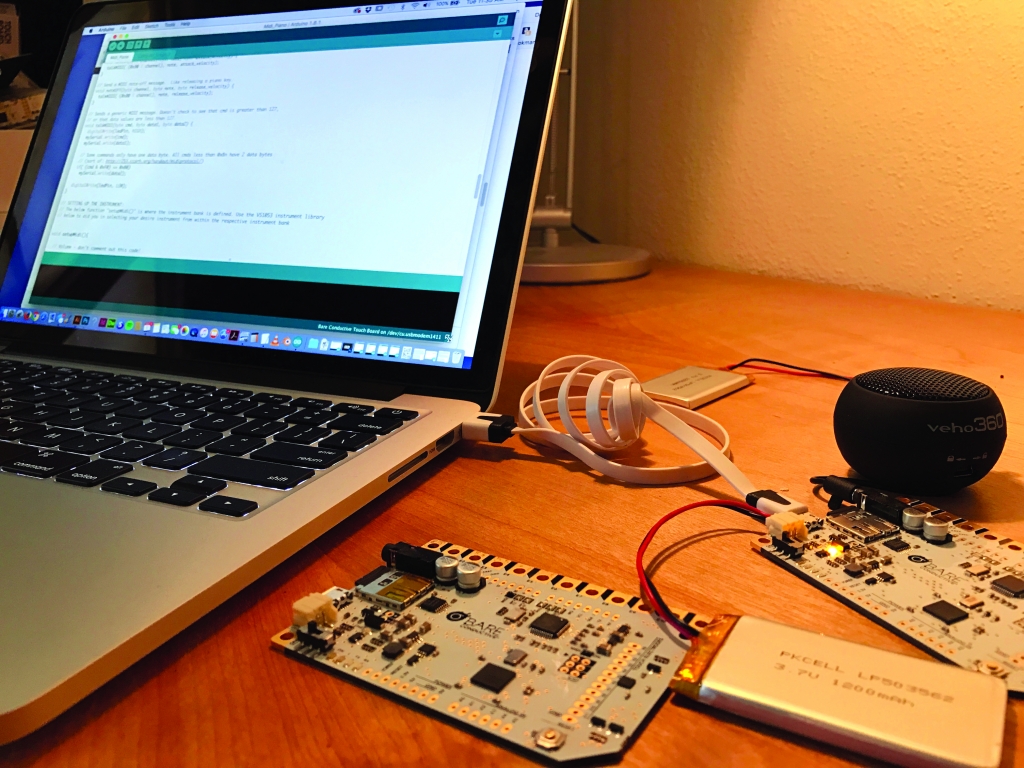 Most people live in the world of now. But a handful live in a world that doesn’t quite exist yet: the world of five years out. It’s the tangible future, where possible meets practical to produce new technologies that help make life better.

Most people live in the world of now. But a handful live in a world that doesn’t quite exist yet: the world of five years out. It’s the tangible future, where possible meets practical to produce new technologies that help make life better.

This past year, the Cherry Creek Arts Festival in Denver partnered with sponsor Arrow Electronics in the Five Years Out Arrow Art Challenge. This is an international competition to inspire artists to take the concept of innovation and express what their particular art medium might look like in five years. Through a competitive selection process, seven finalists were awarded a commission to create a forward-thinking piece. Dan Stiles, a Portland-based artist/designer/screen printer, was one of them.

Over the past 20 years, Dan has worked with everyone from indie bands to major corporations in creating advertising, posters, custom packaging, brand identities, and limited edition collectable art and merchandise. His clients range from Sonic Youth, Arctic Monkeys, and Sasquatch! Music Festival to Google, the X Games, and Nickelodeon. Not content with being a standard-issue graphic designer, he fell down the screen printing wormhole, and recently started linking poster making with printed circuitry and music with his graphics. The result? Modern-day alchemy.

“My interest in this started out with personal experiments,” Stiles explains. “My design process is based on the notion that one thing leads to another. I’ve always felt that people should pursue what interests them creatively, even if they have no idea where it will go. Originally, I wanted to see what more could be done with a poster. I’ve been designing and screen printing for more than 20 years and I wanted to push past what I’ve been doing with the poster as a form.”

His first step was animation: “I began to animate my work in After Effects, but the final result was digital, not physical, and too many people were already doing animation.”

That led him to research new technologies that could be used to bring physical print media into the 21st century. Months of poring over technical articles, data sheets, and blogs led him to a slew of new tech, much of which leveraged screen printing as part of the process. “This was really exciting to me because it was a process I already understood,” Stiles says.

His first experiments used conductive inks and micro-controllers to make print pieces that interacted with computers. Essentially, the poster became an input device, just like a keyboard, allowing it to talk to a computer.

“I would post a short video to social media of the final piece and move on to the next project. It was actually my wife who suggested I enter a proposal into the Arrow Five Years Out Art Challenge. Normally, I’m too busy with work to mess with contests, but since I already had videos of existing experiments, I entered those along with a proposal for a more ambitious project.”

To his surprise, Stiles was shortlisted and won a grant to build a standalone, touch-sensitive electronic poster. The concept was to not only build a functioning piece that was larger and more complicated than anything he had previously tried, but also to have all the computing and power onboard. This piece wouldn’t rely on an external computer for processing or energy.

Stiles says the poster uses “a whole variety of different technologies in order to operate. It has a drum pad, an organ, and a variety of beats and loops that you can turn on and off with the touch of a finger. It was a beast to produce and never would have happened without Arrow Electronics footing the bill. It became an obsession of mine. My wife took to calling it ‘The Mistress’ because it sapped so much of my time and energy.”

It’s not every guy whose wife allows him to have a mistress. Eventually, production moved to the dinner table when the print became too large for his basement print rig. The graphic bits are Speedball Acrylic, and the conductive ink came from Bare Conductive.

The hardest part? “I had a hell of a time with capacity and resistance issues with the conductive ink. I was really pushing it to the limits of how long and thin I could stretch my circuits. But the whole thing is experimental. No part of it was easy,” Stiles says.

After the experiments, he ran 12 sheets; three made the final cut, and one was built out all the way. This is the one that went on display at the Arts Festival, and although he didn’t win the grand prize, it has led to more work utilizing electronics mixed with printed graphics as he continues to explore possible paths.

For example, he produced “Predator” posters for the 30th anniversary of the movie. “I built 10 of those,” Stiles says. “It was my first attempt at mass-producing an electric poster. All the rest have been one-offs. The poster used proximity detection to sense motion. If it sensed someone in front of the poster, laser sights (which were actually paper-thin LEDs) shined from the Predator’s helmet. Right now, I’m working on building OLED displays into a poster for ‘Mars Attacks,’ which will be on exhibit at Gallery 1988 in LA next month.”

In case anyone needed proof, it’s clear that screen printers still have a few things to say about innovation. Who knows what the next five years will bring?

14 Surprising Things You Can Screen Print