“GIVE ME SIX hours to chop down a tree and I will spend the first four sharpening the axe.” – Abraham Lincoln

Abe’s quote about sharpening his axe is an idea that is so practical it can be applied to almost any task that requires a combination of equipment and skills. Preparation made to improve both techniques and tools makes the moment of action so much easier. To a casual onlooker it might appear as though you’re a magician, somehow doing a hard task easily without any friction, when really you’ve spent hours honing the skill. The best time to practice this is during downtime at your shop. The challenge is to translate this concept into practical steps you can use for your specific situation that will benefit your business.

If you’re currently in a printing company that’s experiencing a slow period of business, you should sharpen areas in your company now before getting busy again. Not only will this help refocus energy to improvements you can make, it can also create higher efficiencies and possibly more profitable results over time.

It takes only three steps to hone in on best practices in a short time span: analyze, organize, and streamline.

The first step is the hardest because it’s where the problem is actually defined. Analyzing an area of your company is not about making any determinations or decisions. Instead, it’s all about looking at it from multiple angles until a clear picture emerges. The reason this is hard for a lot of owners and managers is that whenever they start to analyze, they attempt to create solutions simultaneously, leading them to make decisions before the whole picture is visible.

Consider the review of an average screen printer’s art department. Say an owner does a quick analysis on how much work can be done in a day. The typical result of this will provide a snapshot of how many jobs each artist is capable of in the given times. If there are three artists, the average between them might be six jobs per day. One of these artists, however, consistently completes nine jobs per day, while the other two do five. At this point the owner might decide the problem lies in the two artists who are working too slowly. But there’s likely a deeper story. In fact, there could be a whole collection of reasons this situation has unfolded in the art department. Some possibilities could be:

The actual truth could be a combination of these or a dozen we haven’t even considered. So, the critical part of doing a quality analysis of any part of a company is to get a “dimensional” picture from several perspectives, and to make sure the review is deeper than just surface level. If each artist was interviewed about the type of work they do, their process, and how they feel about their productivity, it’s more likely a clear picture could be defined and consequently used to make some useful decisions on how to improve overall output.

In any event, no matter what information is obtained during the analysis stage, it’s important to refrain from making any decisions right away. The point of acquiring the information as a first step is to get a clear picture of the scope and details of all of the moving pieces in an area, department, or problem that is being reviewed. A good way to capture everything for a department is to take daily notes on each person, their equipment, and their process. These notes can then be laid out and used during the next step: Organize.

2. Get Organized, or Get Frustrated

Perhaps you started to analyze a department and before you finished, the process became so overwhelming you threw your hands in the air and quit from frustration. The good news? This is totally normal, and probably more common than the opposite situation where you analyze and create perfect notes, clearly breaking down an entire department with all processes outlined.
The bad news is you may feel like you didn’t get anything done but frustrate yourself. A way to move forward at this point is to step back and change your concept of what “organize” means. The best analogy to this concept is if you step into your child’s room and the entire floor is covered with dirty clothes. Assuming for some crazy reason you’ve decided to help with this process, the best way to move forward without experiencing total paralyzing frustration is to pick some obvious variables to divide the mess into manageable groups. In the case of laundry it makes sense to use groups that will relate to a final process, so you won’t have to re-sort the piles later (like all the reds, darks, whites, and towels together). With an art department review, you can sort your variables into finished processes that will exit the department to production, sales, or customer approvals. If you organize your analyzed processes, equipment, and steps into how they produce assets of value to other departments you will minimize the backtracking later if the data you’ve gathered won’t contribute to a final outcome.

Reviewing an art department can be broken into:

Once you have your data assigned to a group, you can look at each group, see what patterns emerge, and prepare for your last step in the sharpening process: Streamline.

The concept of the term streamline became popular in the 1920s with the redesign of commuter trains. There was a universal shift away from showing the mechanics of a machine and a
previously blocky appearance. The new concept was related to minimizing friction, so a train, car, and anything else that needed to travel at high speed didn’t have to work as hard to cut through the air. In the case of a process in a department, it’s a similar concern. Any part of a process that fights or stalls throughput will be identified and analyzed to see if there’s a way to reduce the friction. In our art department example, the number one group (inbound art channels) can be streamlined once all the channels are identified and the data for each is analyzed. In fact, there are a number of common, attainable ways to streamline artwork as it comes into a company.

If the majority of artwork is coming into a couple of the total available channels the 80/20 consideration is useful. It’s likely that 20 percent of the artwork causes the largest expenditure of time. Once these “time-wasting” files/customers/channels are identified, they can be addressed as a group with a new art policy, new pricing, and/or some additional shortcuts that may minimize the steps or at least help compensate for the hassles.

Depending on volume, if a company finds that several of the channels are bringing in the most profitable orders, far more resources and marketing can be put toward encouraging these types of orders and other channels can be phased out. 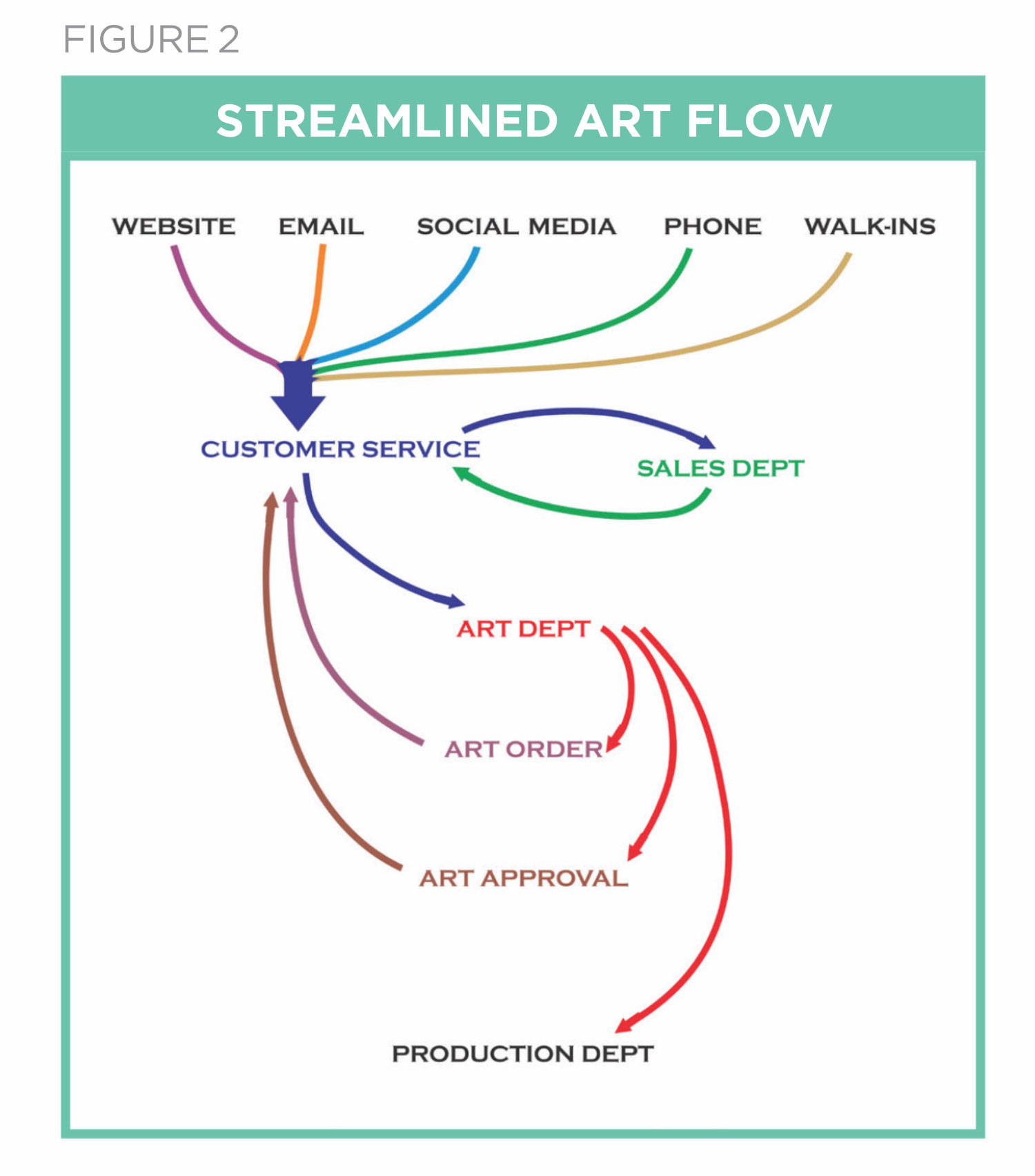 Logistical problems of artwork coming in (missing fonts, wrong formats, poor resolution, etc.) can be streamlined by using a clearly published art submission policy that incentivizes and offers a discount on all orders that adhere to the art standards. A large amount of email art submissions can be time consuming and clunky, and there are often multiple steps for artists to manage attachments (not to mention getting the occasional virus). A streamlined method is to encourage clients to use a website submission portal where they are guided to submit their artwork, and an art order can be assigned along with proper documentation so artist management of orders is minimized.

Although this requires some web development or the use of a premade system to create or utilize a portal, a fast review of the data and time that will be saved vs. using email attachments can show a remarkable savings of time and labor.

For companies that have common, predictable art requests that consistently come in for certain types of orders such as sports teams or company celebrations, developing or purchasing some high-quality art templates can dramatically reduce art processing times and also provide customers with a higher perceived value at a lower cost.

After the areas in a department that could be streamlined are identified, the final decision can be made as to what will be attempted. Sometimes the “chase isn’t worth the kill” with refining processes, like putting a process of tracking for each job that ends up slowing everything down, for example. A better idea is to look at the biggest processes that will also affect other areas down the line. This is one of the reasons that mid-size printers will often consider migrating to a CTS machine and retire their film printers. Streamlining the creation of screens saves untold hours of labor. At the same time it also improves printing quality while reducing issues related to setup/registration, plus exposure is faster. The idea is to improve and refine each area, so that when business begins to boom again, your team will be sharper than ever.

Thomas Trimingham has been helping screen printers for more than 25 years as an industry consultant, freelance artist, and high-end separator. He currently works with M&R as a marketing communications manager. Connect with him on LinkedIn or at tomtrimingham@gmail.com.

20 Ways to Be Successful During Disruption

Give Back - Ohio University and Sudara offer real

TikTok: Turning Followers Into Customers There’

Why Aren’t There More Women Leaders in Screen Pr

Happy Holidays from the team at Screen Printing ma

5 Tech Tools for Your Print Shop - Deciding which

Celebrate the inaugural Women in Screen Printing A

Welcome to the New Age - We’ve shifted our resou